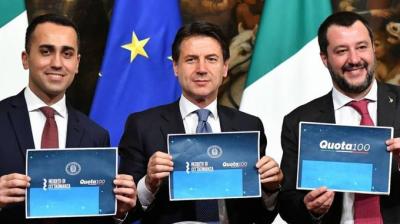 ROME – The government’s two flagship economic measures, the Citizenship Income and Quota 100 pension reforms, have been approved in a cabinet meeting late on Thursday evening.

The Income measure, aimed at providing a ‘basic wage’ for Italian citizens, will be rolled out from April and will involve 1.3 million families, according to Deputy Prime Minister Luigi Di Maio, the flagbearer for the reform.

“Anti-couch” measures have reportedly been included in the bill to ensure it cannot be abused, while funds available would range between 780 and 1032 euros per person.

One million Italians will be able to retire early under the Quota 100 scheme, creating a further million jobs, League leader Matteo Salvini announced as the decrees were signed. Salvini’s party had made promises to amend the unpopular 2011 pension reform that raised the retirement age to 67.

Prime Minister Giuseppe Conte said, “this is a fundamental stage for this government, they are two measures that do not respond to extemporary electoral promises but constitute a project of social and economic policy of which this government is proud.”

Di Maio expressed his delight at the approval, which had risked being further delayed after the lengthy budget negotiations with the EU, saying, “today is an important day and, as always, the citizens are the winners.”