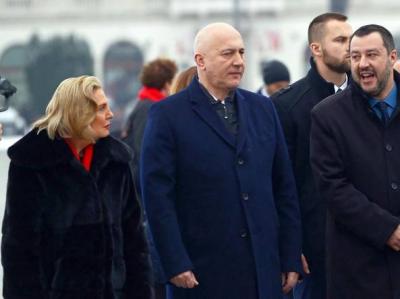 ROME – Interior Minister Matteo Salvini announced his intention to “give meaning to the European dream” in a meeting with Polish majority leader Jaroslaw Kaczynski.

In anticipation of the upcoming European Union elections, set to take place in late May, Salvini met with Kaczynski, leader of Poland’s conservative Law and Order party (PiS), to discuss how to overhaul the Socialist-PPE (European People’s Party) majority in Brussels.

“We had a long, positive and practical meeting on how to give meaning to the European dream,” Salvini was quoted as saying in a press conference at the Italian embassy to Poland. “Changing the bureaucracies that hold up Europe is the goal of the May elections,” Salvini continued.

“We agree on 90 percent of things, the other 10 percent is an open discussion,” the League leader added. The percentage still up-for-debate centres predominantly on their opposing views towards Moscow. While Kaczynski and the Poles consider Putin an enemy, Salvini has repeatedly defended the Kremlin in its conflicts with the EU.

“I continue to have the same doubts about the use of economic sanctions as means to resolve political disputes,” he reaffirmed at the press conference, fielding questions about the EU’s decision to impose sanctions on Russia after the latter invaded Crimea.

Yet Salvini’s pro-Putin stance has not soured relations with Poland and he spoke confidently of the importance of the agreement with PiS. “Who knows, the Franco-German axis could well be replaced by an Italo-Polish one” come May, the Deputy Prime Minister suggested.

The agreement forged between the two parties bears similarities to the model used by Salvini and his counterpart Luigi Di Maio to form Italy’s current coalition, Il Fatto Quotidiano reports. “I proposed a contract with specific commitments to Kaczynski … based on the model of the contract we signed in Italy,” Salvini said. “I would like there to be a common alliance among those who wish to save Europe.”