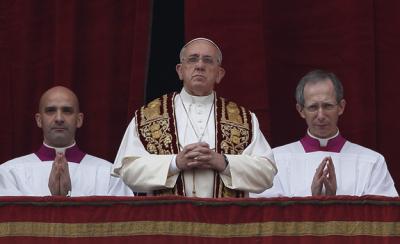 VATICAN CITY – Pope Francis called Tuesday in his urbi et orbi message for peace around the world, saying that the universal message of Christmas is that “we are all brothers and sisters.” He urged an end to a constellation conflicts ranging from the Middle East to Ukraine, Venezuela and Nicaragua.

“This truth is the basis of the Christian vision of humanity,” the pontiff said in his Christmas day “urbi et orbi” (to the city and the world) address. “Without the fraternity that Jesus Christ has bestowed on us, our efforts for a more just world fall short, and even our best plans and projects risk being soulless and empty. For this reason my wish for a happy Christmas is a wish for fraternity,” Francis told a throng of pilgrims and tourists gathered under sunny skies in St. Peter’s Squares.

“By his incarnation, the Son of God tells us that salvation comes through love, acceptance, respect for this poor humanity of ours, which we all share ina great variety of races, languages and cultures. Yet all of us are  brothers and sisters in humanity!”

The pope went on to call for fraternity as a way of ending conflicts around the world. “May this Christmas help us to rediscover the bonds of fraternity linking us together as individuals and joining all peoples. May it enable Israelis and Palestinians to resume dialogue and undertake a journey of peace that can put an end to a conflict that for over 70 years has rent the land chosen by the Lord to show his face of love.”

Francis also called for peace in the “beloved and beleaguered country of Syria once again to find fraternity after these long years of war. May the international community work decisively for a political solution that can put aside divisions and partisan interests, so that the Syrian people, especially those who were forced to leave their own lands and seek refuge elsewhere, can return to live in peace in their own country.”

The Argentine pontiff added that “my thoughts go to Yemen, in the hope that the truce brokered by the international community may finally bring relief to all those children and people exhausted by war and famine.”

Francis continued with reflection on “Africa, where millions of persons are refugees, or displaced and in need of humanitarian assistance and food security.” He said he hoped Christmas would “consolidate the bonds of fraternity uniting the Korean peninsula” and that “this blessed season allow Venezuela once more to recover social harmony and enable all the members of society to work fraternally for the country’s development …”

Francis also expressed hope for “the beloved land of Ukraine, yearning to regain a lasting peace that is slow to come” and that “the inhabitants of beloved Nicaragua see themselves once more as brothers and sisters …”

The pope spoke of the plight of Christian minorities, saying “a particular thought goes to our brothers and sisters who celebrate the Birth of the Lord in difficult, if not hostile situations, especially where the Christian community is a minority, often vulnerable or not taken into account. May the Lord grant that they,a nd all minorities, may live in peace and see their rights recognized, especially the right to religious freedom.”

Francis ended his message by asking that “the little Child whom we contemplate in the manger, in the cold of the night, watch over all the children of the world, and every frail, vulnerable and discarded person. May all of us receive peace and consolation from the birth of the Savior and in the knowledge that we are loved by the one heavenly Father, realize anew that we are brothers and sisters and come to live as such.”