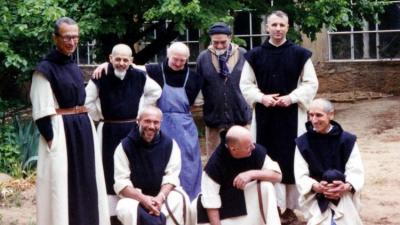 NEW YORK - During a service that was held under tight security and attended by 1,200 people, the Catholic Church beatified the seven French Trappist monks and the 12 clerics who were assassinated during the 1990s Algerian civil war.

The 19 members of the clergy were declared martyrs by the Vatican in January 2018 since they were slain in odium fidei (out of hatred for the faith). And the beatification was celebrated on Dec. 8 in the Chapel of our Lady of Santa Cruz which overlooks the coastal city of Oran – west of the capital Algiers.

This is actually the first ceremony of its kind in a Muslim nation.

However, it should be stated that those beatified were murdered between 1993 and 1996 while Algeria was locked in a decade-long civil warbetween government forces and Islamists. That war left up to 200,000 people dead.

During the night of March 26th-27th, 1996, armed men broke into the Notre Dame de l'Atlas monastery in Tibhirine, some 55 miles (90 km) south of Algiers, and abducted seven out of the nine French Trappist monks. The following month, their severed heads were found at the side of a mountain road. But their bodies were never to be recovered.

Before this tragic night, their elected leader turned down the protection of the dodgy Chef de Daira (local civil authority officer). Yet, the nine monks had to decide whether to stay or leave Algeria. Despite grappling with insecurity in the region, the monks concurred to remain among the local Muslim population, even when faced with political violence and death. By all accounts they were deeply appreciated by local Algerians.

The insurgent Armed Islamic Group (GIA) claimed at the time that it had slit the throats of the Trappist monks, aged between 45 and 82, but responsibility for the assassination has never been conclusively established as many suspect the involvement of Algerian secret services (aka DRS) in the massacre.

Objectors have always sniffed at the official Franco-Algerian versions of how the monks were abducted and assassinated.

According to various reports, it is probable that the carnage was a false flag operation.

Many observers believe that Algeria's services were to blame for these secretly conceived and implemented operations to discredit the Islamist opposition as the regime had always rejected political dialogue.

It is also believed that Algerian secret-service officials had actually infiltrated the GIA; hard-pressed the group to commit a series of horrible acts against the unarmed civilian population; staged the abduction and massacre of the Tibhirine monks to make them look as if they are monsters that need to be eradicated, and in due course to demonize the GIA in both the MENA region and Europe.

But Algerian authorities have insistently denied all these allegations of crimes against humanity.

Twenty-two years on, however, the victims' families, the clergy, and millions of people in France and Algeria are appalled to hear that the monks may have been accidentally killed as the result of a botched Algerian military operation during a rescue attempt.

According to retired French general François Buchwalter’s deposition, given as part of an official investigation in France, French and Algerian authorities covered up the blunder by pointing the finger at the Armed Islamic Group. On the other hand, the merit of Buchwalter's statement is that it exposes the flaws in the narrative that the GIA killed the seven monks.

Many analysts, on both sides of the Mediterranean, believe that the International Criminal Court (ICC) should seriously investigate this crime against humanity in addition to the 200,000 victims of the civil war.

The slaying of the Trappist monks inspired a 2010 French film, "Of Gods and Men,” which won the Grand Prix at the Cannes Film Festival. Nonetheless, the case of the Tibhirine monks, which is virtually unheard of in the US, is still haunting the three-headed Algerian powers that be – the Army, the Presidency, and the predominant security apparatus.

Asked about the abduction and subsequent killing of the monks in 2004, Algerian President Abdelaziz Bouteflika said that “some truths are better not told right away.”

However, the Algerian authorities spared no effort to showcase the beatification of the 7 French Trappist monks and the 12 clerics as a living proof of their religious tolerance and contribution to Christian-Muslim dialogue.

Delivering a sermon at the opening the ceremony, Archbishop Paul Desfarges of Algiers honored “the thousands and thousands of victims of the Algerian civil war” from 1991-2002, describing them as “anonymous heroes.” He also stated that “we did not want a beatification between Christians, because these brothers and sisters died among tens and tens of thousands of Algerian Muslims.”

In an encyclical delivered during the ceremony by Papal envoy, Cardinal Angelo Becciu, His Holiness Pope Francis brought to the fore his belief that “this celebration helps to heal the wounds of the past and create a new dynamic of meeting and living together.”