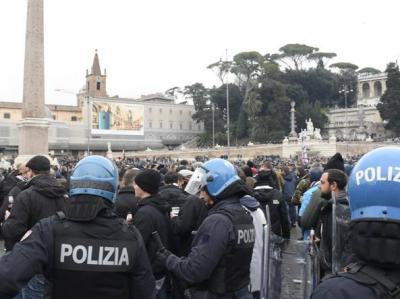 ROME - An unanticipated amount of damage was inflicted upon Trastevere by Eintracht Frankfurt fans on Thursday, both before and after the Europa League match against Lazio. According to a report by Corriere Della Sera, a gang of 20 charged the streets armed with bottles and bats, leaving three people severely injured.

The incident has sparked tension between Italian and German authorities, for the Italians had not been informed about the large influx of notoriously aggressive German fans.

Fans heading to the Stadio Olimpico launched firecrackers down via di San Cosimato, and wreaked havoc upon a supermarket. They threw bottles at members of the Carabinieri who had been forced to intervene, leaving one officer with a nasty shoulder wound.

As many as six fans ended up in hospital. An ambulance was called earlier on in the evening to take two thirty-year old Germans to Fatebenefratelli Hospital, though neither of their injuries have been deemed serious.

According to witnesses, there were riots outside the stadium before the match even started. Fans also attempted to scale barriers during the game.

Police are examining surveillance camera footage to ensure they have identified all individuals responsible for the damage. As many as 14 Germans have allegedly been reported or arrested. Some have also received a 5-year ban from entering sport stadiums.