Celebration of 150 years of Italian Gymnastics 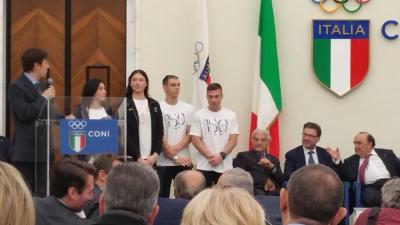 ROME - The press conference of the 150th anniversary of the Italian Gymnastics Federation and the presentation of the "Antenor Energia" Gymnastics Grand Prix 2018 took place at the Coni Salon of Honor.

Among the great sportsmen of the past and present, the event was attended by Bruno Grandi, Honorary President of the Fédération Internationale de Gymnastique, Riccardo Agabio, Honorary President of the Federginnastica, Franco Menichelli (free body gold medal, silver medal at the rings, bronze medal at the Games Tokyo Olympic Games 1964, bronze medal at the free body and teams at the 1960 Olympics in Rome, together with Giovanni Carminucci, Pasquale Carminucci, Orlando Polmonari, Angelo Vicardi and Gianfranco Marzolla), Ms. Emanuela Maccarani (National Technical Director of the Rhythmic Gymnastics Section, the most successful coach of Italian sport, as well as member of the National Council of CONI), Ms. Alessia Maurelli, captain of the Farfalle Azzurre vice world champions and champions already qualified for the Tokyo 2020 Olympic Games, Ms. Giorgia Villa, Continental Champion Female Artistic Juniors, Ms. Milena Baldassarri, silver ribbon medal at the recent Rhythmic Gymnastics World Championships in Sofia, Mr. Nicolò Mozzato, Men's Junior Gymnastics Championship Champion and Mr. Marco Lodadio, bronze medal in the rings at the World Cup in Doha, a place that was missing from eight years. For the presentation of the 2018 "Antenore Energia" Grand Prix, the following were present: Diego Bonavina, Councilor for Sport, Municipality of Padua, Filippo Agostini, CEO of Antenore Energia and Roberto Ghiretti, President of SG Plus.

The president Tecchi declared that, "for me this is a great moment, this press conference introduces to 2019, the year of the 150th anniversary of the Gymnastic Federation of Italy. Ours is a story that embraces all the Italian sport, from the youngest to the great champions: from Franco Menichelli to Jury Chechi to Igor Cassina up to our athletes who will compete to get to Tokyo 2020. If they manage to win all the medals won at the Olympic Games of 1964, we would all be very happy. We have pursued a path of the highest level, working and taking care of the base in schools. We have 1300 associations and 150 thousand members, constantly growing because the Federation tries to do things right. We are not satisfied. I have to thank gymnasts, technicians, judges, managers, colleagues from the council and regional presidents: without their contribution, we could not do anything."

In turn, the President of Coni, Giovanni Malagò said: "The 150th anniversary of the Gymnastic Federation of Italy is such an important date. We are happy to have thought with President Gherardo Tecchi about the celebrations of this event. The history of our country has always been accompanied by that of Federginnastica. Gymnastics has always been ahead, it is the basis of every discipline. Today we have giants: from Tecchi to the honorary President Riccardo Agabio, from the National Technical Director Emanuela Maccarani to the captain of the Squad Alessia Maurelli. We are happy to have collaborated in the project of the Butterfly House in Desio, the reality of Rhythmic Gymnastics is unique in its kind. We are proud of the achievements of Marco Lodadio, Giorgia Villa and Nicolò Mozzato. The President of Coni is proud for many reasons, above all to celebrate the 150 years of the Federation's history."

Undersecretary Giancarlo Giorgetti added: "I confess my ignorance, I was surprised when I discovered that the Federation of Italian Gymnastics celebrated 150 years of history. All the other disciplines descend from gymnastics, because it teaches to know oneself and to command head and body. It also has an educational and universal function. Unfortunately, it does not have the media spotlight it deserves, but it is a beautiful world. It is often subject to judging by judges and I hope that in Tokyo 2020, our athletes who failed to win a medal at the Rio 2016 Olympic Games can do so. We do not let the witnesses of those who arrived first fall."

The Grand Prix Antenore Energia 2018, is the 27th edition of the kermesse that will bring to the Kioene Arena in Padua, Dec. 8, the performances of the blue champions of Artistic, Rhythmic, Aerobics and Acrobatics.

This event closes a fantastic year for the whole movement and projects it towards the celebrations of the 150th anniversary of the foundation of FGI. Over 30 stars of artistic, rhythmic, aerobic and acrobatic gymnastics, including Olympic, world and European medals, will take to the streets of the Veneto city to create a breathtaking show and amaze the audience with top-level performances and spectacular live performances.