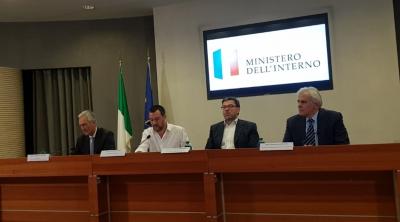 “Those who make mistakes must pay, and will do heavily,” the Deputy Prime Minister said on Tuesday. “We must punish criminals who attack referees,” he reaffirmed, while also claiming that Italian football is facing an “educational emergency.” “I will do everything possible to bring discipline, rules, order, respect, good education and sanctions to the pitch,” he added, though clarifying that he refuses “to consider the idea of militarising football fields.”

“Enough, enough, enough,” pleaded President of the FIGC Gabriele Gravina at the press conference, adding, “everyone needs to be aware that anyone who touches a referee has to pay a penalty, which could extend to a ban.” “We no longer want these people in our world,” he concluded. The topic will be discussed at the next FIGC council meeting, sources report.

Bernadini, 24, was refereeing a game between Virtus Olympia and Atletico Torrenova when, at full-time, he was attacked. He was struck, fell to the ground and hit his head on concrete, splitting it open. Were it not for a few onlookers who were trained in first-aid, the consequences could have been extremely grave. The match was in the amateur league in Lazio, one of the worst areas in Italy for abuse towards referees.