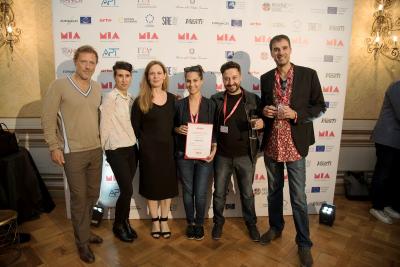 ROME - The 4th edition of the MIA, the International Audio-visual Market, has just closed at the Barberini District, in Rome.

The event was a resounding success, shown by the millions of views on Twitter. The success is due to the choice made by the organizers to give a strong identity trait to the event, and thanks to the transparency of the format, built on an industry that received positive validation by the Italian and International markets.

This identity was exemplified by the highly innovative European reorganization of the autonomous management of ANICA and APT, led by the Presidents Francesco Rutelli and Giancarlo Leone, by the Executive Directors Mina Larocca and Chiara Sbarigia and supported by all the companies that the two associations represent.

Lucia Milazzotto, Director of MIA, expressed great satisfaction saying that "it was a vibrant market, because the number of meetings and deals was well beyond expectations," adding that it is "relevant because MIA is a market that gathers the leaders of the sector. It was important because it is a strong European market that, at the same time, has seen major US participation.”

Still using the list of adjectives most frequently used by the guests, the MIA was, Milazzotto explains, "useful, because the Italian and European industries increasingly need unobstructed spaces in which to meet. But most of all, MIA is strategic: MIA is becoming an appointment not to be missed, right after MIP and before AFM." Finally, concludes Milazzotto, MIA has been "Italian, International and beautiful, which were the adjectives I heard most often these days. Italian because Italy is experiencing a crucial moment in its history regarding international development; in this context, Italy will play an important role in the global trading tables. International because it gathers the industries of 58 countries that come to Rome to do business. Finally, in a simple word that sums up the exceptional atmosphere of these 4 days, MIA was beautiful as it is the only market that lives and breathes in extraordinary locations that reflect two thousand years of history."

Here are the 2018 prizes awarded within MIA, the international audiovisual market. The Lazio Frames Cinema Award has been awarded to Bangla by Phaym Bhuiyan, produced by Fandango and TIMVISION Production. The ARTE Kino International Award for the films selected in the MIA-Cinema section went to Silvia Perra's Domina Maris, Main Producers Luca Cabriolu. The Lazio Frames TV Series Award went to The Name of the Rose by Giacomo Battiato, produced by March 11th Film, Palomar, Tele Munchen International GmbH, and received the award from Matteo Levi. The National Geographic Award for the best pitch of the MIA-DOC 2018 went to Jérémy Leroux's Vibrato, Day For Night Productions. The 7th edition of the Carlo Bixio Award promoted by APT, RTI and RAI has given the following awards: Carlo Bixio Prize offered by SIAE in Achille's Gold by Elio Penna, Giuseppe Maria Martino, Armando Francesco Serrano; the Carlo Bixio Award assigned by Rai for the best concept went to Redemption by Matteo Ferri and the best screenplay award to Bordello Chiaia by Laura Grimaldi and Pietro Seghetti. Eurimages Development Award for the best European co-production project of 20,000 euros at The Nightsiren by Tereza Nvotova, produced by Milos Lochman for Moloko Film.