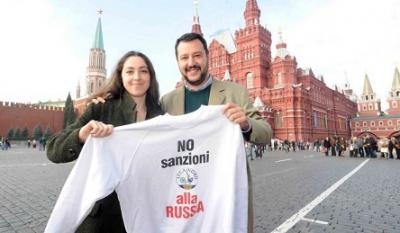 MOSCOW – On his visit to the capital this week, Italian Interior Minister Matteo Salvini has heavily criticised sanctions placed on Russia by the European Union.

In a speech to Russian industrialists on Wednesday, Salvini called the sanctions “economic, social and cultural madness” and “an absurdity.”

Italy has the ability to veto the renewal of these sanctions by the EU, but when asked if he would recommend this approach, Salvini kept his cards close to his chest. “We can only use the trump card of the veto in Europe once,” he said. “We are counting on the fact,” he continued, “that they are intelligent enough in Brussels to understand that they have gone over the top and that you have to return to good relations between the EU, Italy and Russia.”

He continued with his criticism of the sanctions, conveying disappointment that the whole of Russia has been affected by the financial constraints placed on the country. He commented, “if someone made a mistake that person will have to pay but making hundreds of millions of citizens and small and medium businessmen pay is madness, I think.”

Salvini also advocated for the use of dialogue in finding solutions in the modern era, rather than using or threatening force. “The problems of 2018,” he said, “are to be solved sitting at a table and not with tanks at the borders.”