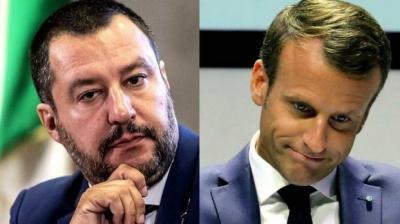 ROME – Interior Minister Matteo Salvini has launched an attack against French authorities an incident at the French-Italian border in Claviere.

According to two agents from the DIGOS division of the Italian police, French gendarmes unloaded two migrants of African descent from a van in a stretch of woods that runs along the border between the two countries on Friday morning.

The agents claim that the gendarmes indicated with hand movements that the migrants had to leave, before returning to their vehicle and driving off. It has been reported that the Italian police took a photo at this point, capturing the number plate of the gendarmes’ van.

Italian under-secretary of infrastructure, Edoardo Rixi, was quoted as saying that the incident “if confirmed, is serious and surreal.”

A clarifying statement has been released by French authorities, which has expressed their “regret” over what they have called an “error.” The gendarmes in question had only arrived in the region “a few days previously”, and so “they did not know the area well,” explained Cécil Bigot-Dekeyzer, prefect of the Hautes-Alpes region.

Salvini did not accept these explanations, saying that “the abandonment of immigrants in an Italian wood cannot be considered an error… What happened at Claviere is an unprecedented offense against our country.”

He went on to describe the incident as “disgusting”, stating that “Mr (President Emmanuel) Macron cannot act as if nothing has happened,” before clarifying conclusively that Italy “does not accept the apologies [of the French].”

The Interior Minister had stated on Monday that “I don’t want to believe that Macron’s France uses its police to dump migrants in Italy in secret. But if someone really thinks they can use us as the refugee camp of Europe, breaching laws, borders and agreements, they are hugely mistaken.”

Salvini is to continue his offensive against the French President in an interview with Politique International magazine that will be published on Oct. 18. In it, he is quoted as saying “Macron is entitled to protect his borders, but don’t let him come and give me lectures or preach to me.”