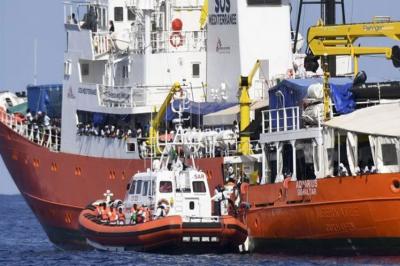 GENEVA - Migrants crossing from Libya to Italy are more at risk than ever warns the UNHCR after the Aquarius has been confined to port following first Gibraltar and then Panama removing their flags from the rescue ship.

The warning came as 58 migrants finally disembarked from the Aquarius in Malta on Sep. 30, where they will be redistributed among four other countries – France, Germany, Portugal and Spain.

While the UN Refugee Agency welcomed the deal between the five countries, it said Aquarius’ deregistration is “deeply worrying” and called for increased search and rescue operations in the Mediterranean.

“Reinforcing search and rescue capacity on the Central Mediterranean and disembarkation in places of safety, has to be everyone’s goal,” UN High Commissioner for Refugees Filippo Grandi said in a statement. “We are talking about people’s lives. Refugees and migrants cannot be continually put at risk while States argue over their responsibilities.”

According to French President Emmanuel Macron, the Aquarius 2 will now dock in the city of Marseille to rectify its stateless position, after losing its Panama registration flag.