Macron admission on Algeria may be 50 years too late 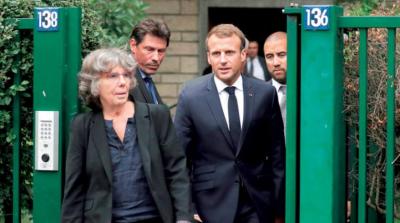 French President Emmanuel Macron with Michele Audin, daughter of Maurice Audin, tortured and killed during the Battle of Algiers.

NEW YORK - When Emmanuel Macron last week publicly acknowledged the culpability of French authorities in abducting and torturing Maurice Audin, a 25-year-old mathematician and staunch supporter of Algerian independence who went missing after his arrest in 1957, the president shed light on one of the darkest moments in France’s colonial history. Mr Macron – the first French leader born after the Algerian war and the first to go so far in admitting its dark past – not only asked for forgiveness from Audin’s widow Josette but denounced a “system instigated while Algeria was part of France”.

Audin disappeared during the 1956-1957 Battle of Algiers, in which the Algerian National Liberation Front (FLN) engaged in a series of guerrilla attacks on both French soldiers and civilians. The French police and military struck back with mass executions, forced disappearances and the routine use of torture. Audin himself disappeared in July 1957, when French paratroopers burst into his apartment in Algiers and dragged him away while his three young children slept. He was never seen again.

Josette Audin, now 87, campaigned tirelessly for more than six decades for answers from the French government about the fate of her husband. But his disappearance, like that of thousands of Algerians during the war of independence, has remained a mystery – until now.

It was not until last year, on the campaign trail and during a visit to Algiers, that Mr Macron sparked a furore in France and an immense interest in Algeria when he described France’s 132 years of colonisation as a “crime against humanity” and called on France to apologise. That comment drew strong rebuke from liberals and far-right leaders alike.

As an Algerian myself, I took his comments with a pinch of salt but thought I should give the man the benefit of the doubt. Mr Macron is the first president to openly admit that his country’s colonisation of Algeria had involved “crimes and acts of barbarism”, a significant and historic step.

But upon his return to France and after becoming president in May last year, Mr Macron failed to follow through on his clarion cry for an apology. For millions of Algerians like me, his declaration had gone up like a rocket and come down a stick.

For my family, like a number of staunch Algerian nationalists who suffered the real meaning of “liberté, egalité and fraternité”, the war of independence left its scars. My father, a lieutenant in the Algerian Liberation Army, was killed by French troops. My mother, a civilian who acted as an agent de liaison during the war, was almost killed in an ambush.

When one considers how French lawmakers passed a law in 2005 glorifying the colonial project and urging high school teachers to pass on its “positive values” to pupils; when one thinks of how Francois Fillon, a right-wing presidential hopeful, likened France’s colonial past to a “cultural exchange”, it becomes clear an apology alone would never bring closure.

It should also be noted that the collective dream of freedom that Algeria experienced when it became independent in 1962 was stopped in full flow. Instead of pressing for colonisation to be recognised as a crime against humanity, the 81-year-old ailing Algerian president Abdelaziz Bouteflika has made the French Algerian Amity Treaty, signed with Jacques Chirac, a top priority for his government.

Meanwhile France is using double standards in its condemnation of torture. Mr Macron said France would eternally contend with minority issues until the country addresses what really happened in the colonies. Compare that, however, with the treatment of more than five million people of Algerian descent living in France today. Although they might master the French language and most of the cultural codes, they are constantly reminded that they are not French. Those differences were exacerbated during the 2005 Paris riots, when then interior minister Nicolas Sarkozy referred to the French youth who took part, many of Maghrebi and African descent, as “scum”.

Many in Algeria believe Mr Macron’s decision is all about French internal affairs. Nevertheless, we would like to see a similar admission regarding the Algerian revolutionary leader Larbi Ben Mhidi, who helped found the FLN and was said to have been tortured and summarily executed on the watch of French army general Paul Aussaresses.

Mr Macron’s acknowledgement of France’s “institutionalised torture” against Algerians and humanists such as Audin is appreciated but it is high time the people behind the crimes against civilians were held accountable. The French-Algerian war remains a taboo for the French establishment and a divisive issue in France. While Algerian and French historians on both sides of the Mediterranean concur that the Algerian war of independence, which ran from 1954 to 1962, was one of the most brutal anti-colonial struggles of the 20th century and claimed hundreds of thousands of lives, they disagree on the extent of its impact.

Before Algeria rose up against French colonial rule in 1954, it had been considered for more than a century as a “departement Francais”; part and parcel of France. The country was home to more than a million Spanish, Maltese, Italian, and mostly French settlers, known as pieds-noirs. Many of these European settlers and their offspring left Algeria on the eve of independence in 1962 and still live in France today.

The accepted version of French history says that about 400,000 people were killed in the war; Algerian officials say the number goes beyond 1.5 million. That is not the only part where their histories are at odds. Even after France suffered a defeat and left Algeria, it would not refer to what had happened there as a “war”. Until very recently the war was referred to as “the events in Algeria”. For Algerian officials, it could only be termed a “revolution”.

France’s colonial presence in Algeria, in addition to the seven-year war that ended it, remains an open wound in French and Algerian historical memories. For the French, it is one of the darkest moments of its past. Many have compared it to the shameful collaboration with Nazi Germany under Vichy rule and the deportation of Jews. And if very few French leaders have been ready to admit France’s colonisation of Algeria and the violent methods used to quell any uprising against its rule, even fewer are prepared to apologise for it.

So the question remains: did Mr Macron go far enough? He has come closer than any of his predecessors to admitting the extent of torture committed by the coldblooded and extremely well-equipped French colonial forces during the war. But, with the exception of the apology to Mrs Audin, the president stopped short of expressing remorse for all the tortures and murders committed in Algeria and against Algerians.

It is perhaps little surprise that Mr Macron was the first to take such an initiative. He is part of a younger generation more willing to address the country’s history than its forebears. Mr Macron has expressed a strong desire for French-Algerian relations to be forward-looking, despite historical rancour and past tragedies. Yet he was quick to state that he favoured “a policy of recognition, not of repentance”. By “recognition”, he surely means a greater historical acknowledgement of the facts.

But for the Algerian regime, this is too little too late. It wants full repentance.

Should Mr Macron have apologised? An official apology is what the Algerian regime has always demanded but for millions of Algerians – and especially for those of us whose parents and relatives took an active part in the war of independence – an apology is irrelevant. Unlike the post-independence ruling elite, we believe that Algeria fought a bloody war for its independence and the price was dearly paid. Nothing can compensate that.

Dr Abdelkader Cheref is an independent scholar based in the US

(This article first appeared in The National)