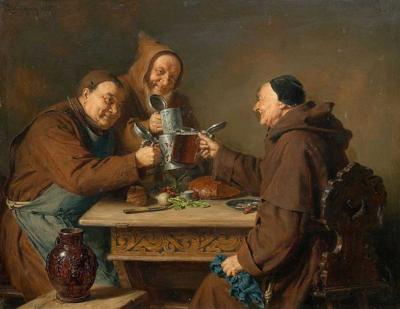 ROME – Monks in the historic Monte Cassino have signed a contract with Peroni to launch the abbey as an up-and-coming beer producer of a powerful brew named after their founder St. Benedict.

The news on Tuesday could not have come at a better time for the abbey, still reeling from a chain of terrible press, most notably the scandal of the ex-abbot don Pietro Vittorelli who allegedly purloined funds from Italy’s ‘eight per thousand’ tax funds to pursue a life of luxury. The money derived from this charitable law, in which taxpayers devolve a compulsory 0.8% from their annual tax income return to an organised religion, enabled the ex-abbot to build up a bill of 34 million euros travelling within Rio and London. Shortly after, the limelight fell on his secretary Antonio Potenza, after he moved to Britain, converted to Anglicanism and married a girl in Westminster following an earlier relationship.

In the wake of these disasters and in an evident bid to draw more positive attention to the abbey located half way between Rome and Naples, the monks have signed a contract with Peroni to produce and market their very own high quality beer. Dom Donato Ogliari, the abbot since 2014 in Montecassino, announced the new beer venture on Tuesday.

To avoid further trouble, Pope Francis has removed the management of the diocese from the abbey itself to that of its neighbour Sora, whilst Peroni will have started up production and marketing by the coming autumn.

The beer itself, named St benedict's beer after the founder of the monastery, with an alcohol percentage of 6.5, will be produced with barley from Saplo di Pomezia and will be made according to an ancient recipe which has been conserved for decades. According to experts in the sector, is the very first artisanal formula.

The beer will be created in a little artisanal factory in the town of Albaneta within the old large farms around the monastery, and everything will come together in collaboration with Birra Peroni, yet recovering centuries old traditions. Around Albaneta is already an area of great historical interest, boasting the antique monastery of Santa Maria, and the business has also set aside enough to finance the restoration of the antique church.

Director of international relations at Peroni, Federico Sannella, captured the value of the business venture on June 27 by showing how it combines tradition, natural beauty and agricultural activity, calling it a “privilege” to “add even more value to an area so rich in history and culture.” The terrain around Albaneta will return to a previous productive state and the abbey will look forward to a productive future producing Montecassino beer.