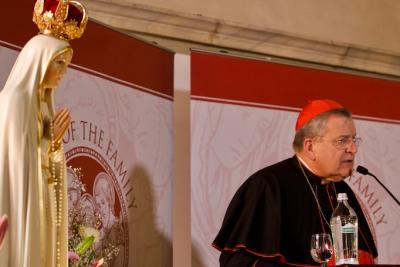 VATICAN CITY – Cardinal Leonard Burke has asked for the Italian bishops’ daily, the Avvenire, to issue a public apology for publishing an article that deeply offended him, officials say.

The American Cardinal, who is one of the main conservative critics of Pope Francis, said: "I want to ask you to rectify, by means of public correction, the article, and at the same time issue a public apology regarding the real object and tenor of my reflections, very different from the false ones attributed to me by your newspaper".

It’s probably the first time that such an event happens at the Catholic daily.

Former priest, Gianni Gennari, accused Cardinal Burke last month of being out of time and preaching against “the Church of today as if it were going through the time of Antichrist."

The cardinal was "bitterly" annoyed by Gennari’s remarks, claiming that he had not mentioned anything about the Antichrist in a conference, but rather focused on the "plenitudo potestatis" (unlimited power) of the Roman Pontiff.

The director of the Avvenire, Marco Tarquinio, responded to the cardinal’s indignity by issuing a public apology on Friday. However, he also explained that the article was born of a “quid pro quo” and responded in kind.

He also mentioned that Burke had referred to the Apocalypse in an interview published on an online site in the days prior to the conference.

"It is in that interview,” Tarquinio writes, “that he speaks of the life of the Church in apocalyptic terms, he cites the final test, evokes the apostasy of truth and also explains the best way to correct the Roman Pontiff".