Who is Saint Matthew for Caravaggio? 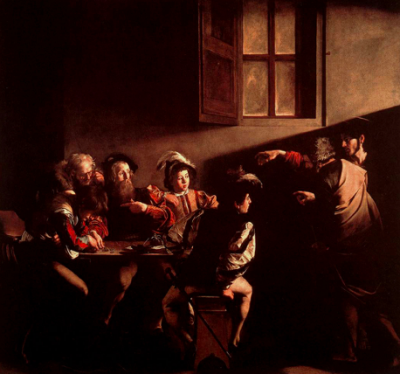 ROME - Art Historian, Sara Magister, has made a strange proposal that the boy in darkness at the end of the table is really Saint Matthew. She rejects the universally understood idea that the bearded man who points to himself, the one that Jesus points to, is Saint Matthew. Later in the Gospel we learn that Saint Matthew is a man not a boy. Jesus goes to his house.

Sara Magister’s father, Journalist Sandro Magister, is promoting her book about her mistaken interpretation of Caravaggio.

The idea has been around for a while but it has not resonated because it is counter intuitive.

Sara Magister’s speculation is an exercise in creative writing. Caravaggio tells the whole story in stopped time as he did in many of his other paintings. Art historian Elizabeth Lev in her Zenit article response to Magister’s same claim in 2012 said that “Caravaggio’s most important characteristic, besides his dramatic use of light, was his penchant for capturing the culminating instant on canvas.”

Caravaggio is a master story teller and we know at first glance what he is saying.

The gospel narrative could not be more concise. “Jesus saw a man named Matthew at his seat in the custom house, and said to him, ‘Follow me’, Matthew rose and followed him.” Luke 5:27. Caravaggio was an orthodox Counter Reformation Catholic artist who followed the precepts of the Council of Trent to make religious paintings with clear unambiguous meanings. It is a mistake to over think Caravaggio.

Putting a new meaning onto the painting would necessitate that the gospel be rewritten something like; “Jesus saw a man named Matthew, and said to him, ‘Follow me’. Matthew did not hear him and did not respond.”

Since the story is the calling, the gesture of the man with the beard “Who me?” is appropriate and does not require any further explanation. The boy is too young to be a tax collector. If you take away all the other characters and only Jesus and the man with the beard remain, the story is still complete. If it is only Jesus pointing to the boy with his head down, there is no story of calling and hearing the call. The gospel account does include the hearing and also the response.

In all of Caravaggio’s other paintings we can easily identify the main character. That main character is never part of the crowd described solely with a touch of light on the nose and chin. The painter always gives us more, employing pose and gesture, and always light tells us the story.

The composition is a boomerang. The circle of figures around the table slings the gesture back to Jesus. The man pointing to himself accelerates that movement. And the feathers on hats point the direction of the movement going from Jesus on the far side of the table, coming around the curve at the end of the table, and returning on the near side accentuated by the lean of the figure closest to Jesus and Saint Peter.

In Caravaggio’s The Raising of Lazarus, Jesus is calling “Lazarus come out” and Lazarus is already half way up. Caravaggio compresses time and we get the whole story immediately. The artist does not require that we use our imaginations to complete the story.

We have grown up with abstract art and we know that in art, truth is relative, why can’t we make up our own interpretations of the story? You can, but don’t for a minute believe that Caravaggio intended to make a puzzle or that he intended to not have the last word. He would be surprised by viewers providing their own superfluous meanings.

He told Gospel and Old Testament stories with power and also with clarity. Art Historian Kenneth Clark said that the Calling of Saint Matthew changed the history of painting. It did establish how religious paintings would be made for the following centuries.

If you have any doubts about meaning in a Caravaggio painting, follow the light. Sebastian Schutes does just that in his classic Taschen monograph on Caravaggio, “the light falls with full intensity upon Matthew, who in a moment- illuminated by divine illumination- will rise in order to follow unreservedly his calling to be a disciple. Thus, the two brightly lit youths at the top end of the table have also turned toward Christ, while the two figures in shadow at the far end, entirely preoccupied with the financial matters at hand, are still completely unaware of the divine message. The process of conversion and the impact of the divine are illustrated metaphorically by light and shade.” -1.

And biographer Helen Langdon follows the light and says, “The light falls on Matthew alone, while the other figures remain nonchalant.  The youth at the end of the table, his head in shadow, his fingers lingering on the coins, suggests unredeemed humanity, dwelling in darkness, and perhaps carries overtones of the story of the rich young man who could not forsake all and follow Christ.” -2.

Art Historian John T. Spike says, “A bushy- haired youth sits at the end of the table from Jesus; he obstinately refuses to look up, clutching a moneybag to his belly. The future apostle touches his own chest questioningly in response to the powerful summons of the Savior.” -3,

There is no need for an expert to explain what a Caravaggio painting is about. As seen in situ in the Contarelli Chapel it looks like the gospel story, Jesus calls the bearded man and the man reacts.

In an email to The Italian Insider Ms Sara Magister pointed out the following:

I am Sara Magister, the author of the book 'Caravaggio. il vero Matteo'.

I am asking why a newspaper so serious, as the one that you advertise is, permitted the publishing of a review of a book that clearly dr. Cornelius Sullivan had not read, also because it was put on sale only yesterday.

His review is based on the only two english text that mention very few of the many arguments that support that and others of my thesis.
One of the two dates back to the far 2012, the other one, the article of my father (as the dr. likes to remark) is just an abstract of a book of nearly 200 pages, of which more than 100 are of footnotes on three columns.

The studies of other authors that he mentions, are of course included in the 16 pages double column of bibliography that i read and discussed extensively.

To be symple, i find the article that you published a perfect exercise of creative and fake journalism. A journalism that judges a book written in a language that the journalist doesn’t manage well, the Italian, without reading it.

You will offer the right and honest service to your readers if you will publish my answer under the article of dr. Sullivan. Or I will have to believe and advertise that your newspaper is only one of the many factious and unreliable information channel around the world.

To which Cornelius Sullivan responded:

"I did not write a book review. My only interest is addressing the question that is in the title of the article, 'Who is Saint Matthew for Caravaggio.'"