Balotelli makes up for lost time in Azzurri win 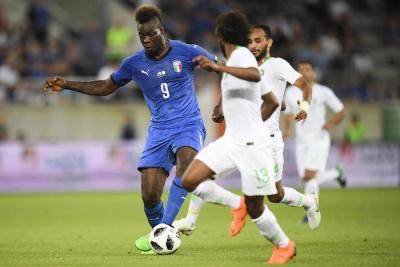 ROME – New Italy coach Roberto Mancini kicked off his Azzurri reign with a 2-1 win over World Cup-bound Saudi Arabia. A revitalised Mario Balotelli scored on his return to the national team after a four-year absence.

Mancini, 53, who took over from Gian Piero Ventura earlier this month following a disastrous World Cup qualifying campaign, lined up a fresh-looking Italian side including 19-year-old goalkeeper Gianluigi Donnarumma, and a strike force of the recently overlooked Lorenzo Insigne alongside Balotelli.

The maverick striker, who hadn’t featured for the Azzurri since the 2014 World Cup opened the scoring with a brilliant solo goal, cutting inside Ahmed Ateef before steering in a powerful long-range strike.

Andrea Belotti doubled the lead, following up his own header, before Yahya Al-Shehri took advantage of some defensive errors to cut back the Italian lead.

Yet, the new Italy boss has several positives to take out of Monday night’s display. The Azzurri demonstrated their bolstered threat and a renewed hunger following a series of spineless showings throughout the World Cup debacle.

Whilst victory was crucial to set the tone for the Mancini era, the bitter mood was inevitable as Saudi Arabia warm up for Russia 2018.

Upcoming fixtures against France, this Friday, followed by a clash with the Netherlands next week will provide sterner tests as Italy look to lay down a marker with Mancini building towards the 2020 Euros.