Mubarak and the Two Omars 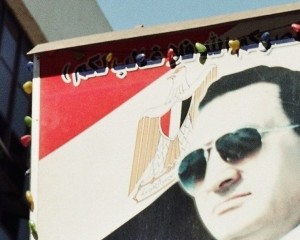 Text and photos by SHELLY KITTLESON

ROME– Prisons have been opened, the Egyptian Museum of Antiquities damaged, the internet shut down, curfews imposed, and government buildings and police stations burned, with widely varying estimates of casualties. Food rations are scarce in Egypt but protestors are showing no sign of backing down.

Neighbourhood watches have been set up, with citizens armed in a makeshift manner to fight off would-be looters, whether those seeking personal advantage or encouraged by a government actively seeking an excuse for a further tightening of the reins.
News networks are flooded with the latest developments, Al Jazeera has been kicked out of the country and various journalists beaten, with at least one Egyptian one killed.

The 82-year-old Mubarak is overall holding his ground and has begrudgingly made only a few concessions, albeit clearly ones not to the extent or of the sort demanded by those involved in the protests.

The naming of General Omar Suleiman, 74, as vice president (a position which was created for the very purpose) seemed a slap in the face to those aware of the latter’s background. Though leaders with long track records in the secret services abound in a number of nations - Andropov, Putin and many others earned their stripes and requisite experience in the ranks of intelligence services - his pedigree as the head of Egypt’s intelligence service since 1993 and involvement in widespread torture has been in the spotlight before.

Suleiman was undoubtedly involved in the infamous extraordinary rendition from Italian soil of another Omar, the Milan cleric Hassan Mustafa Osama Nasr - more widely known as Abu Omar - in 2003. After been extradited to Egypt despite enjoying political asylum in Italy as well as Italian citizenship, Abu Omar allegedly suffered torture including rape at the hands of Omar Suleiman’s henchmen.

Years later Omar was released by an Egyptian court which ruled that his detention had been ‘’unfounded”. On the case, an Italian court in late 2009 found former head of the CIA in Milan Robert Lady and 23 others (21 alleged operatives and a US air force officer) guilty in absentia of kidnapping in the world’s first ever trial concerning the CIA’s extraordinary rendition programme for abducting those suspected of terrorism. Those found guilty were handed down sentences of between five and eight years in prison. In well-researched works by Jane Mayer and Stephen Grey, Suleiman is considered to have played the leading role in the rendition programme and was the US’s main contact within Egypt.

Moreover, according to Richard Neville on the basis of a memoir written by Mamdouh Habib, an Australian citizen accused by the US of terrorism who was interrogated by Suleiman after being picked up in Pakistan and flown to Egypt before being taken to Guantanamo: ‘’Habib was repeatedly zapped with high-voltage electricity, immersed in water up to his nostrils, beaten, his fingers were broken and he was hung from metal hooks… To loosen Habib’s tongue, Suleiman ordered a guard to murder a gruesomely shackled Turkistan prisoner in front of Habib - and he did, with a vicious karate kick”. After three years in detention, Habib was sent back to Australia without ever having been formally charged.
Calling for an end to police brutality, a state of emergency and repression by the state, protestors cannot be expected to be placated by giving more power to someone with a record for directing and engaging in state torture.

Another element is being closely watched by those focused on fundamentalist trends in the Middle East is the Muslim Brotherhood, or Al-Ikhwan, as they are known in the country. Egypt’s major opposition group, it is officially outlawed but nevertheless typically fields a number of candidates as independents in elections and held - albeit unofficially - a number of seats in the Egyptian parliament until recently, after the group pulled its members out of the much-disputed November parliamentary elections. Founded by the school teacher Hassan Al Banna in 1928, it is a group whose very name conjures up images of extremism and which is credited for providing the blueprint for other fundamentalist organisations worldwide.

However, the group has so far kept a low profile in the protests, whether - as some would charge - as a way to keep out of the limelight and only take charge once the fighting is over, or simply because it is not their revolution. It is one ‘’by the people and for the people”, foremost among them the legions of youth who have proved so adept at using social networks and modern technology to organise and say no to an unbearable state of repression, lack of opportunities and election fraud.
The coming days will tell when and if Mubarak and those surrounding him will be forced to leave the country, whether also this revolution will fall into the ‘wrong’ hands, or whether Egyptians will for once be rewarded - as they are so hungry for - with leaders held accountable to the masses, and not the other way around.