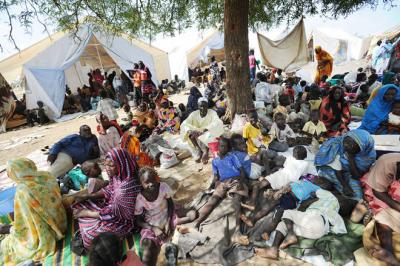 ROME – The charitable organisation Caritas has released a report on the escalating crisis in Cameroon, after a brutal army crackdown against an independence movement in the English-speaking regions of the country led to “monstrous violence”, officials say.

“Soldiers are burning villages,” says Moilgan, a refugee who’s now escaped to Nigeria from the south-western part of Cameroon, deemed the epicentre of the Anglophone crisis. “People are living in the bush. If you even walk up to the roadside you can be shot.”

The country’s Catholic bishops have issued a “cry of distress”, as the humanitarian crisis continues to deteriorate.

It’s a situation “marked by blind, inhumane, monstrous violence and a radicalisation of positions that alarms us”, state the bishops in their 16 May statement, signed by Monsignor Samuel Kleda, President of the Cameroon Bishops’ Conference.

“Let us stop all forms of violence and cease killing each other,” pleads the letter. “Let us save our country, Cameroon, from a baseless and futile civil war.”

No journalists are being allowed into the areas of conflict, which is why the disaster is so under-reported.

However, Caritas agents in Cameroon estimate that at least 150 people, including 64 civilians, have been killed so far in battles between the army and separatists. The actual figure is likely to be a lot higher.

“The reality is going from bad to worse,” reports Abbé Kisito Balla Onana, Director of Caritas Cameroon. “More deaths and kidnappings in the last few days.”

Caritas is appealing for urgent funds to reach 5,000 refugees in Nigeria with basic supplies over the next two months and aims to reach displaced people in Cameroon with emergency relief.

It's currently the only aid agency in the badly affected Anglophone areas of south-west and north-west Cameroon, providing food, water, medical supplies and shelter.

However, it is very short on resources and the needs are vast.

Across the border, Caritas Nigeria has recorded 25,624 Cameroonian refugees but according to the UN, the total may be 40,000. Four fifths are women and children. Only five in 100 refugees have proper shelter, the rest sleeping rough in abandoned buildings, or out in the open.

Bishops in Cameroon and Nigeria are urging tolerance and both sides to dialogue, however, those in Nigeria have warned of the consequences of the refugee influx: “We are lacking food, shelter, clean drinking water,” says one Nigerian village leader. “People are sick and dying.”

Caritas Mamfé concludes in a report:  “The situation remains tense and gives no sign of better days ahead.”

For more information, and photos of Nigeria refugee situation: https://www.caritas.org/2018/05/cameroon/