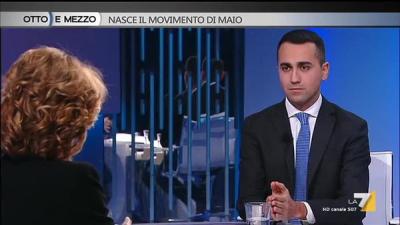 During the talk show Otto e mezzo, the political show host ended her daily programme with some heated questions directed towards the Secretary over Movement position on the war zone. Concentrating her inquiries on the recent Syria bombing, Gruber asked the majority party winner about the questionable presence of the same nuclear submarine in Naples roadstead before the Middle East raid.

While the Parthenope Admiral has denied the submarine present in the Italian harbour to be the very same, the matter still appears hazy. “I expect Prime Minister Paolo Gentiloni will shed light on the matter tomorrow in Parliament,” stated the movement leader on air. “It’s still not clear if the submarine participated in the recent attack on Syria.”

The big question arose in the mind of Mayor of Naples Luigi de Magistris days ago as to just what the American nuclear submarine was doing in the Naples harbour. In an attempt to shine light onto the subject, the Parthenope leader sent a letter to Admiral Arturo Faraone, commander of the Port of Naples last week.

“It has come to my attention that on 20th March the nuclear submarine USS John Warner reached the Port of Naples. I have read order 17/2018 sent out by you concerning necessary and correlated instructions for security and navigation. As of such, I’d like to reiterate that on 23rd September 2015 deliberation n. 609 was approved, declaring this area “denuclearised”, impeding the docking or stopping of any nuclear vessel in Naples,” specifies the note.

Re-affirming Naples as “a city of peace”, the mayor expressed how important it was for the densely populated urban area to be viewed as respectful of human rights, entirely disarmed and promoter of international cooperation.

While discrepancies come to the surface, it appears that the cited submarine may indeed have participated in the recent missile attack in Syria. As a matter of fact, a Military Source You Tube channel published footage on the day of the attack (Saturday 7th April) where a Tomahawk missile is launched from a submarine similar to the John Warner - nicknamed “Sledgehammer of Freedom” by its crew.

“The decision to allow foreign military ships to transit in national waters is not our responsibility, seeing we are at part of the Ministry of Transport,” nonetheless explained the admiral.

The mayor’s note does however indicate the ship was sighted on 20th March, weeks before the suspected chemical attack on Duma and subsequent missile bombing.

“We’d like for he who has the authority to deny entrance in the Port of Naples for political reasons of disarmament, peace and opposition to nuclear weapons not to mention the danger civilians undergo due to the accidents such ships are capable of provoking,” de Magistris concludes in his note to the Admiral.

While Italian authorities have declared the country will not participate in a military action promoted by the USA against Syria, this does not exclude the use of its military bases. As in the past, Italy could furnish support through its American bases in accordance to the bilateral infrastructure agreement that disciplines the presence of such structures throughout the national territory.

The Naval Support Activity of Naples, where the US Sixth Fleet holds is primary headquarters, covers the Mediterranean, parts of Africa and Northern Europe. The Campania Region capital would thus assume a key role in case of attack within its district, participating actively on Italian soil.

Although formal authorization would be necessary to use the bases, this is considered a mere formality as the Italian government would surely give a green light.