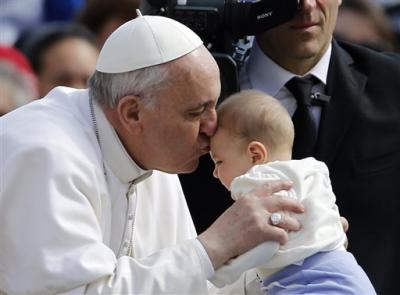 VATICAN CITY – During today’s General Audience at St. Peter’s Square, Pope Francis decided to focus on the topic of baptism.

His appeal was directed at Catholic parents, to whom he said, “Do not forget to baptise your children.”

This comes after internal statistics reveal that more and more newly born babies are not being baptised, as well as being conceived out of wedlock.

The pontiff highlighted how this rising figure was of great concern to him, since baptism is the door to all other sacraments that allow Catholics to grow in the faith until they reach the Kingdom of Heaven.

He asked mothers and fathers to stop putting this crucial event off with excuses such as the child won’t understand. Indeed, “Being baptised means being called to holiness.”

In a second appeal, he urged those gathered in front of him to go to their parish church and find out the date of their baptism. He proceeded to say that we should remember and celebrate it as our “second birthday, our rebirth”, since it was the day that the Holy Spirit first entered our lives.

Despite the extensive security measures left over from the Easter period, St. Peter’s Square was filled with people of all nationalities gathered there to hear the pontiff.