Potholes spiral out of control as Rome’s roads deteriorate 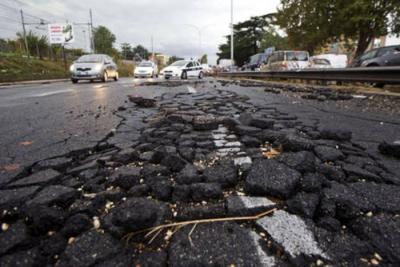 ROME – Prosecutors have opened an investigation into the Italian capital’s copious potholes as mayor, Virginia Raggi, unveils the 17 million euro ‘Marshall Plan’ to improve the city’s infrastructure. Drivers have grown tired of the soaring number of potholes scattered throughout Rome prompting Raggi to call for “timely and urgent repairs” as data emerges showing one in ten vehicles have been damaged by potholes.

Abnormally heavy rainfall followed by snow and ice has opened up new holes in the roads whilst widening the thousands of already existing cavities. The problem has progressed from an inconvenience for motorists to damaging and dangerous conditions on the capital’s roads.

Buses have been forced to alter their route, speed limits have frequently been reduced and there have been several traffic jams around the city. The ‘Marshall Plan’ hopes to quickly resolve the situation, filling 1,500 potholes every day for a month, whilst compensation claims continue to rise.

Public Works Councillor, Margherita Gatta, was quick to direct the blame towards the capital’s previous administration, although the emergence of 110 potholes in just the last month, causing almost two hundred incidents per day, does little to disguise this ongoing, increasingly apparent issue.

Codacons, a non-profit organisation comprising various associations working for the protection of consumer rights, compiled much of the data and predicts “an avalanche of compensation cases against city authorities”. The organisation has encouraged road users to contact them for support in any damage claims associated with potholes.

The consumer associations have requested an inquiry into the responsibility for the uncontrolled road deterioration, which they believe may lead to crimes for omission of duty, fraud and injury. There have been further calls for information from records and documents, concerning “the assignment for reconstruction and maintenance works on Rome’s road surfaces”, to be made public.

As of yet, no individuals have been placed under investigation, nor have any possible charges been revealed.