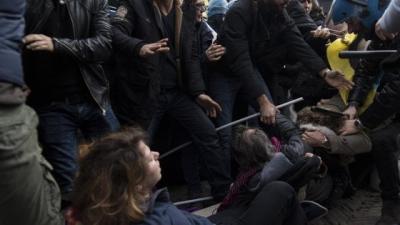 VATICAN CITY – Pro-Kurdish protesters and police scuffled near the CastelSantAngelo Monday, police said, as Recep Tayyip Erdogan met with Pope Francis in an audience, making the first visit of a Turkish head of state to the Vatican in 59 years for talks expected to focus on the status of Jerusalem.

Almost 3,500 police officers and agents have been deployed about Rome to ensure the safety of the Turkish president, who travelled from the Vatican to further meetings with Italian Prime Minister, Paolo Gentiloni and President, Sergio Mattarella. However, protesters claimed that the green zone established between St Peter’s, Piazza del Popolo and the Colosseum, where assemblies were broken up, was an attempt to silence justified protests towards the controversial Turkish leader.

At the Castel Sant’Angelo two protesters were arrested and one was injured, after a group demonstrating under the banner “Erdogan executioner” tried to break police lines. Members of the Kurdish community are amongst those protesting Vatican silence on the deaths of Kurdish civilians at the hands of Turkish forces in Syria, police sources said. Previous efforts had been made to break into St Peter’s square during Erdogan’s Vatican meeting.

Protestors remain in the gardens of the CastelSantangelo fortress, occupying the area with a sit-in and refusing to leave until their fellow protesters are released.

Francis has been lauded in Turkey for his rejection of America’s move to recognise Jerusalem as Israel's capital. Prior to Christmas, Erdogan called the pontiff to thank him for siding with the Muslim world, a call that facilitated Monday’s visit. Pope Francis's silence regarding Turkish attacks on Kurdish forces has been notable, especially given his recent interventions on other international matters, such as the Rohingya in Myanmar.

Erdogan arrived at the Vatican this morning alongside his wife, daughter and several ministers. A spokesperson for the Vatican reported that the Turkish President and Pope Francis had discussed Jerusalem, alongside the "necessity to establish peace in the region through dialogue and negotiation with respect to human rights and international law" and the Catholic community in Turkey.

Erdogan was expected to use meetings with Italy's President and Prime Minister on Monday afternoon to discuss Turkey's continuing but stalled bid to join the European Union.

However, even before Erdogan had touched down on Italian soil the polemics had begun. The Northern League’s leader, Matteo Salvini, claimed he was “ashamed that Italy were hosting the representative of a bloody and extremist regime, of a country in fact, where religion holds sway over the law.”

However, Turkey’s President hit back on Sunday afternoon at Istanbul’s Ataturk Airport, by noting Saturday’s racially charged attack in Macerata, where an Italian neo-fascist opened fire on migrants in retaliation for the murder of a woman in the city.

That attack, President Erdogan argued, “shows how great the threat of xenophobia has become. There is no difference between the attacks of a terrorist organisation and racist attacks of this type.”