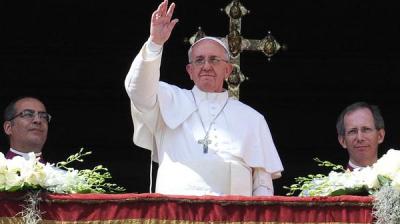 VATICAN CITY – Pope Francis issued a heartfelt Christmas Day appeal for peace in Jerusalem and the Holy Land Monday, calling for “peaceful co-existence of two States” in an Urbi et Orbi address that clearly rejected U.S. President Trump’s call for Jerusalem to be the capital of Israel.

“Today, as the winds of war are blowing in our world and an outdated model of development continues to produce human, societal and environmental decline, Christmas invites us to focus on the sign of the Child and to recognize him in the faces of little children, especially those for whom, like Jesus, “there is no place in the inn,” the pontiff told a throng of pilgrims gathered in St Peter’s Square.

“We see Jesus in the children of the Middle East who continue to suffer because of growing tensions between Israelis and Palestinians. On this festive day, let us ask the Lord for peace for Jerusalem and for all the Holy Land,” the pope said.

“Let us pray that the will to resume dialogue may prevail between the parties and that a negotiated solution can finally be reached, one that would allow the peaceful coexistence of two States within mutually agreed and internationally recognized borders,” Francis said.

“May the Lord also sustain the efforts of those in the international community inspired by good will to help that afflicted land to find, despite grave obstacles the harmony, justice and security that is has long awaited.”

The leader of the Roman Catholic Church added “we see Jesus in the faces of Syrian children still marked by the war that, in these years, has caused such bloodshed in that country. May beloved Syria at last recover respect for the dignity of every person through a shared commitment to rebuild the fabric of society, without regard for ethnic and religious membership. We see Jesus in the children of Iraq, wounded and torn by the conflicts that country has experienced in the last 15 years, and in the children of Yemen, where there is an ongoing conflict that has been largely forgotten, with serious humanitarian implications for its people, who suffer from hunger and the spread of diseases.”

The pope also expressed his concern for the children of Africa and “wherever peace and security are threatened by the danger of tensions and new conflicts.”

“Let us pray that confrontation may be overcome on the Korean peninsula and that mutual trust may increase in the interest of the world as a whole.”

The pontiff spoke also of the plight of children in Venezuela, of unemployed parents, or who are forced to work at a very young age or are enrolled as child soldiers.

“We see Jesus in many children forced to leave their countries to travel alone in inhuman consitions and who become an easy target for human traffickers. Through their eyes we see the drama of all those forced to emigrate and risk their lives to face exhausting journeys that end at times in tragedy … Jesus knows well the pain of not being welcomed and how hard it is not to have a place to lay one’s head. May our hearts not be closed as they were in the homes of Bethlehem,” the pope said.