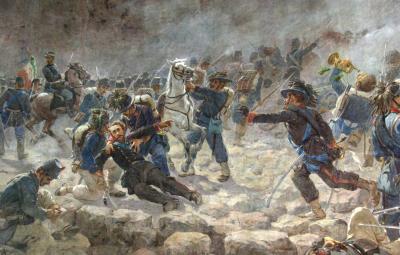 ROME- As the 147th anniversary of the Porta Pia Breach of 1870 approaches, which marked the end of the papal state and its incorporation into the newly formed Italian nation, Rome prepares to celebrate its heritage with a manifestation of civic pride evocatively named ‘‘History’s Lights on Porta Pia’’ (‘’Luci della storia su Porta Pia’’).

The yearly event is organised by the Bersaglieri National Association (ANB), the ‘Bersaglieri’ being the military corps responsible for the conquest of Rome. While the project was originally developed by Nunzio Paolucci, former director of the History Museum of the Bersaglieri and current president of ANB, this year Paolo Peroso, president of the Friends of Porta Pia Association, will coordinate the activities.

Peroso will also be responsible for awarding the recipients of the '‘Oltre la Breccia’' prize, to be awarded to those responsible of positive and momentous deeds for the good of the city, and the good of its citizens. The Porta Pia Association will also present the Progetto Fillippide, its aim being assisting and supporting families with the daily challenges presented by autism.

The event will not be exclusively a celebration of the events of 1870, but also a cultural and philanthropic initiative with a wide scope. On Sept. 12 to 17, every night between 18:00 and 21:00, a series of events and discussions will take place, starting from a discussion panel comprising of two famous WWI historians- Col. Cristiano de Chigi and Dr. Paolo Volpato- which will debate the role of Gen. Luigi Cadorna during the Great War. A concert by the Musical Band of the Vatican Gendarmerie is to follow.

The entertainment for the following nights will comprise of concerts form a variety of Italian Army bands, concluding on the final night with the joint performance of the ANB’s band and the City of Rome Pipe Band, who will play the famous fanfare, military hymn of the Bersaglieri corps, which under that very tune assaulted the walls of Porta Pia almost a century and a half ago, thus liberating the Eternal City.