Venice gets tough with tourists swimming in canals 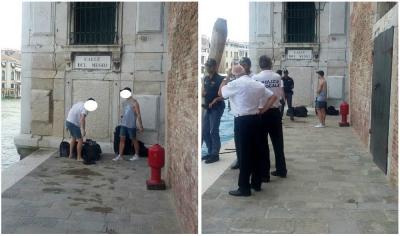 Australian tourists caught 'in flagrante' in Venice
VENICE -- Three foreign tourists, two Germans and an Australian, have received hefty fines of 450 euros (400 pounds) each for swimming in canals in Venice in the first use of stiffer penalties against the hordes of unruly visitors who are maddening Venetians by making la Serenissima unliveable.

Two German young men were spotted by police in a canal close to the Piazza San Marco at 2:30 a.m. Saturday. One of the two was emerging from the canal in wet underwear while the other was poised to dive in the water. Both told police they wanted to "cool off," from the summer heat and had no idea it is illegal to swim in Venice's busy waterways.

The two were taken to a local police station and issued with the fines.

At lunchtime on Saturday an Australian was arrested and fined the same amount on charges of swimming in the Grand Canal after a taxi driver alerted police who rushed to the scene. A second young Australian also present was let off with a warning as he already had got dressed again after taking a dip among the gondolas and steamers carrying tourists.

Venice police chief Danilo Gagliardi said foreigners should be forced to pay the fines on the spot. "It is difficult to combat bad manners without tools," he said, "bad-mannered foreigners know that in the past they would not be punished in Italy. In the United States they would be arrested."

Venice alderman for tourism Renato Boraso, said he would report the Australians to the Bed and Breakfast hotel where they were staying and also check that the fine was paid.

"It is important that hotels inform their guests about the rules that have to be respected in Venice," he said.

Also Saturday night police were called after an Anglo Saxon couple was videoed having sex under the Rialto Bridge as steamers full of tourists ploughed past. The video was posted on the website of the Nuova Venezia newspaper.

Venetians have demonstrated against oafish foreign tourists lowering the tone of the canal city as part of the growing revolt at the impact of mass tourism in southern Europe.

As tourists flock to Italy, meanwhile, samples from Italian seawater taken in 2017  resulted in 40 percent being classed as "polluted," according to a study conducted by the environmental organisation Legambiente.

Goletta Verde, a boat owned by the non-profit organisation, sailed for over 7000 km (4000 miles) along the Italian coastline to collect 260 sea water samples from various points, 105 of which showed bacterial levels “beyond legal limits.” The study revealed: “The pollution is linked to the presence of sewage disposal that has not been purified.”