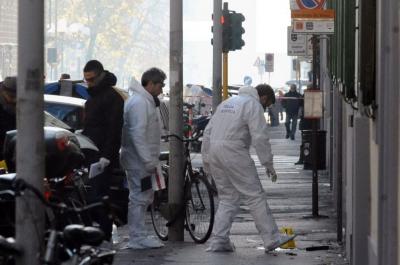 Scenes from the CasaPound bombing

FLORENCE- Five people have been arrested over the bombing of the neo-Fascist Casa Pound club in the Tuscan capital, local police have said. The “anarchic militants” attacked “Il Bargello” during New Year celebrations 2016-17, in which police bomb disposal expert Mario Vece was seriously injured, losing a hand and an eye.

A letter bomb was placed through the shutter of the ‘Il Bargello’ library in via Leonardo Da Vinci, a type of social club associated with far right-wing politics. The device was on a timer and exploded exactly when the bomb disposal expert started to examine it, at 5.30am January 1 2017.

The "Bargello" bookstore was a meeting centre for far right-wing affiliates and had around 150 members. It was a CasaPound, social clubs named after the literary figure Ezra Pound who expressed support for both Mussolini and Hitler. It had been a point of debate in Florence for a long time prior to the attack, with many pushing for it to be closed, especially those from anarchic circles. On January 14 2016, around 20 hooded figures stormed the building, when it was then in via d’Annunzio, damaging the door and windows. In the early morning of February 3 2016, a letter bomb exploded in front of the store, damaging property but with no human causalities.

Following the New Years’ Eve bombing, the head of the Florence CasaPound, Saverio Di Giulio, wrote: “We need to be brave enough to start calling things by their proper name. We are in the face of a real and proper terrorist attack.”

Five people have been arrested on charges of the construction, possession, and carrying of an explosive device into a public place, attempted murder and damage to property.

Another three militants have been arrested for suspected involvement in the petrol bomb attack against Rovezzano Carabinieri station, in the province of Florence, in April 2016. They threw three hand made bombs against the building. Fortunately, no-one was injured in the attack.

The arrests took place throughout the provinces of Florence, Rome and Lecce. 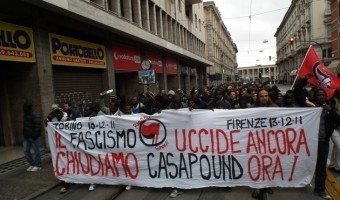