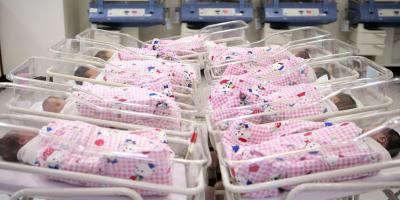 ROME - Italy’s birth rate has continued to decline: for the second year in a row, less than half a million (473, 438 to be precise) babies were born, according to Istat, the Italian National Institute of Statistics.

The survey also shows the rate of natural increase (RNI: the crude birth rate minus the crude death rate) as being -142,000. When broken down, this figure becomes positive for foreign nationals (63,000) whilst for Italian citizens it remains negative at -204,675. This is to a lesser degree than in 2015, but still higher than the early 2000s: the most recent statistics show that the decrease in births was accompanied by a decrease in deaths.

Istat’s survey on the statutory budget shows that currently, 8.3% of Italy’s residents are foreign citizens, the majority of whom live in the Centre-North of the peninsula. This has increased by 20, 870 people since 2015, a number that has been steadily rising for years.

The primary culprits of the population decline are the Italians themselves: -96, 981 residents since last year. This figure would have been larger had 202,000 foreigners not recently succeeded in obtaining Italian citizenship.

A European Union report released in March 2017 titled “Fertility Statistics” recorded a “higher than average mean age of women at the birth of their first child but a lower total fertility rate than the EU-28 average” in Italy.

Website mapsofworld.com also published a map of European Countries by Birth Rate in May this year, placing Italy seventh from last with a Crude Birth Rate (births per 1000 population per year) of just 8.7.