Fire on ferry outside Palermo 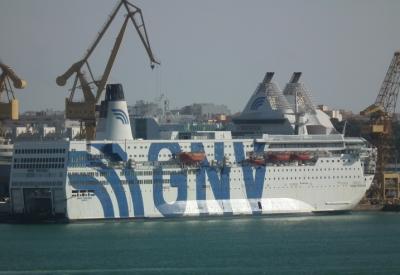 Firefighters and all those available at the harbour intervened on Sunday and managed to save all 113 passengers and 75 crew members on board, none of whom were hurt.

The fire started in the engine room while the ferry was still a mile from port. The captain took immediate action to manoeuvre the ferry into port in order to help rescue services to solve the problem. As he did so he notified the port authority that everything was “under control.” In the meantime passengers had been rounded up and taken to evacuation points around the ship and away from the engine room.

Passengers described the efforts of the crew as “very good, really good,” she added that “Being gathered in evacuation points was scary but there was never panic. We never saw any flames.” Passengers reported the smell “but then the staff reacted and quickly intervened. They supported us well and gave us directions and reassured us.”

The only moment of tension came when the ship docked in the Santa Lucia dock. Passengers who thought they would be able disembark immediately were told to wait for emergency services to open the door. It took a total of one hour for it to be done whilst the passengers were unaware that the fire had been tackled.

The Palermo prosecution is still considering whether to open an investigation as there is a chance that the fire was caused by arson.