'Guerilla warfare' at University of Bologna 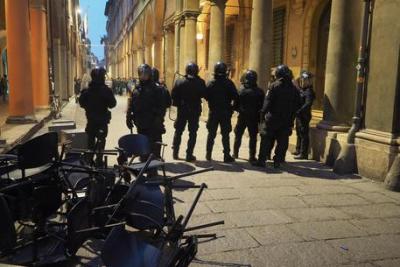 BOLOGNA -- University authorities were counting the cost Friday after violent clashes broke out between revolting student activists and 'thuggish' police in Piazza Verdi in a protest that has been going on for days against the placing of turnstiles at the University entrance to limit access.

Activists from various university collectives occupied the library in the Humanities Department, barricading the entrance using chairs, desks and benches. Some university staff and protestors were reportedly left  injured.

Other young protesters then gathered in the streets, launching cobblestones and other hard objects at police. Locals fled to nearby bars and shops to take refuge.

The around 100 students then backed off and moved to the Economics faculty, faced by 30 policemen who baton-charged them to free the square.

During the worst of the clashes, two protestors were arrested and police arrived with anti-riot gear after being called by university staff.

Giovanni Paglia, Member of Parliament for the Italian Left federation, said of the revolt, “Police charges inside a university library is a serious event, unacceptable and even unimaginable,” adding, “I think the Minister of the University and the Interior Minister must give an explanation for this.”

On the other hand, Manes Bernardini, leader of the civic movement Insieme Bologna and ex-representative of the Lega Nord political party, asks for the “immediate expulsion” of “troublemaking students.”