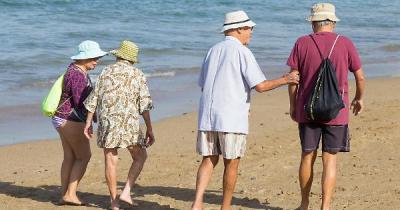 ROME – Italian pensioners choose to leave for Portugal and the Canary Islands instead of staying in the bel paese, as around 0.5 million move abroad in their retirement, Il Fatto Quotidano reports Monday.

Approximately 60 percent of pensioners receive less than 750 euros for their pension in their hometown -- it is hard to imagine a comfortable lifestyle for the older generation of Italians living off such funds. The solution for many, it seems, is to cross the borders into other more hospitable countries.

In Lisbon, for example, an Italian pensioner who would receive 750 euros in their hometown would receive 900 euros in the Portuguese capital, not to mention the ‘tax heaven’ reputation the country has been labelled with over the years.

The prices are generally much cheaper there too. According to the research company Numbeo.com, a meal for two in a Portuguese restaurant would cost 30 euros, in comparison to 50 euros in Rome, and a litre of milk would cost on average 0.59 euros in contrast to 1.46 in the Eternal City.

The INPS (Italian National Institute of Social Welfare) pays 400,000 euros a year to Italian citizens abroad, with 4,849 Italian pensioners in Spain and 8,488 in Brazil.

According to the Italian daily Il Fatto Quotidiano, “Italy is not a country adapted to those over a certain age.” This may be the case.

INPS said in their latest report, World Wide INPS, “In recent years we have seen a constantly increasing number of Italians leaving for other countries in which, with a sufficient level of social and health services, living costs are lower than in Italy and the weight of the Tax Agency is inferior.”

The report also added, “Besides the so-called ‘escape of the brains’ (referring to the brain drain of Italy’s intellectual population migrating overseas to find work), an ‘escape of the pensioners’ is also starting to be noted.”

Unsurprisingly, this ‘escape of the pensioners’ doesn’t look good for the Italian economy. INPS said, “The payment of pensions to foreign countries represents an economic loss for Italy, as the distributed total does not return in the form of consumption or investments and generates a lesser volume of taxes.”

And it is not just Portugal that is a popular destination -- numerous countries across Europe are widely chosen. The Canary Islands is another favourite hot spot for Italian retirees, with living costs 40 percent lower than in Italy and with it being “rare to pay over 4-5 percent tax,” says Carlo Quipotti, founder of the ‘Nuova-Vita’ (New Life) agency.