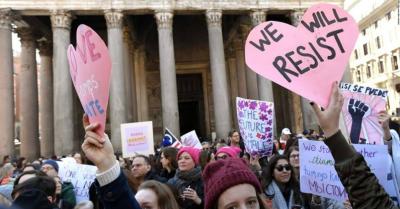 ROME--It’s always a scene outside the Pantheon on Saturdays, with a crowd full of tourists clutching selfie sticks and the sounds of street musicians and laughing children. Today, the piazza echoed with chants of “Yes we must!” and  hundreds of hands clutched something else: signs, bearing slogans like “Nasty Women Against Fascism,” “Muslim Lives Matter,” “Our Bodies, Our Power,” and, more to the point, “WE HATE DONALD TRUMP.”

The Women’s March on Rome is a sister event of the widely-publicized Women’s March on Washington. According to the Rome march’s Facebook page, “the mission of the Global Women’s Marches is not only to stand together in solidarity for the protection of our rights, our safety, our families and our environment -- it is also to build relationships and mend the divides between our communities.” While not officially an anti-Trump protest, the prevailing spirit of this march, and the ones happening all around both Italy and the world, is that the newly-inaugurated President is uniquely dangerous and must be resisted.

“This event is a message to Americans back home that they’re not alone, and to the new administration that even though we’re in Rome, they’re accountable to the world,” said Danielle Miklos-Antenone, one of the organizers of the protest.

In terms of political impact, the Rome march is, by itself, minor. The organizers were denied police permits both to use a sound system (they had to rely on a feeble megaphone), and to actually march through the streets of the city. Turnout was only a few hundred people, and the atmosphere was congenial rather than tense. If you had hoped that your protest sign might get to backhand some tear gas canisters or brain a fascist hooligan, this wasn’t the place. But every protestor I spoke with felt that their presence was important today, both for the world and for themselves

“It’s important to be another body,” said Alexandra Alise, who was carrying a sign that read “I MAY BE AMERICAN, BUT THE ORANGE FUHRER IS NOT MY PRESIDENT!”

“This makes me feel better, because I’m terrified of what Trump will do” she added. “There’s not much I can do, but I can be here.”

Although Rome may not have had hosted the biggest march today, it was, as the birthplace of fascism, a fitting place for today’s protest. As the Italian writer Umberto Eco noted, “fascism became an all-purpose term because one can eliminate from a fascist regime one or more features, and it will still be recognizable as fascist.” Donald Trump isn’t an heir to Mussolini, but his politics can be described as fascist, and therefore will provoke a cockroach-in-the-kitchen disgust in many people.

Whom Trump resembles more is Silvio Berlusconi — the former Italian Prime Minister and business tycoon who arrived in office with little experience but plenty of conflicts of interest and accusations of sexual misconduct. Some Italians I’ve spoken to have compared them optimistically, saying “We survived Berlusconi, you’ll survive Trump.” But when I spoke with Giorgio Celin, a Roman student, at the protest, he said he was at the Pantheon because of the main difference between Berlusconi and the new President.

“Yes, they’re similar, but Italy and America are different countries, and America is far more influential,” he said. “The way Trump talks is dangerous for the whole world.”

There are, by current estimate, going to be 673 Women’s Marches around the world today. Some, like the one in Washington, will draw thousands of protesters and be broadcast on the news. Others, like Rome, allow a handful of like-minded people to act on the feeling that we have entered a dark new era, andtherefore something must be done.