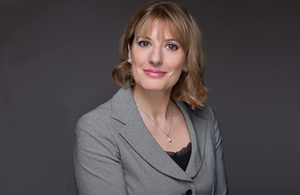 ROME -- Jill Morris CMG has taken over from Christopher Prentice, who has gone into retirement, as Britain’s ambassador to Italy, the first woman to have ever held the position, which in the past was seen as a final, retirement post as a reward for worthy FCO men who had served in hazardous or difficult places.

Ms Morris brings a wealth of knowledge to the role, having served as director of the Europe department at the Foreign Office (FCO) for the last four years. She joined the FCO in 1999, and before becoming director of the European department, spent three years in Brussels with the UK delegation to the European Union. She also awarded the prestigious CMG, Companion of the Order of St Michael and St George, for her services to British Foreign Policy in June 2015.

Ms Morris began her stint at the EMbassy by recording a voice message in Italian which said “Leaving the European Union does not mean leaving Europe. The United Kingdom will continue to be a European country.” She added, “even if the way of working together changes, the objectives and common interests with between Europe and Italy will remain unchanged: peace, security and prosperity.”

On Friday she is playing hostess to a clutch of Rome correspondents for 'mainstream' UK newspapers at a lunch at the Villa Wolkonsky, the official residence, diplomatic sources said.