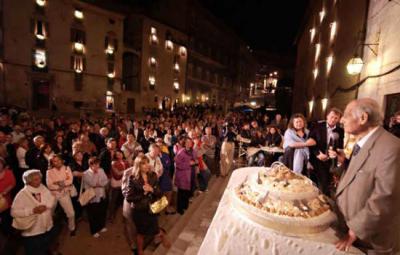 The festival draws thousands to the picturesque Umbrian town each year.

SPOLETO -- A Roman man in the box we shared, chatting before the curtain rose in a Spoleto theatre, agreed with me about the uncanny options of summer festivals in Rome (an embarrassing choice, to paraphrase an Italian expression). Not only do all roads lead to Rome, but most roaming artists take that road. Subscribing to the Ovid, modern Roman or Buddhist philosophy (i.e. why run if you can walk; why walk if you can sit?), why indeed go anywhere if it comes to your doorstep?

The Roman said, the only difference in coming here [to Spoleto] would be for the possible off-chance of running into a musician.
Was he ironic? The curtain strings were pulled and I had to hush.

Funnily enough, that evening I discovered, that, having booked the last-minute lodging option, San Carlo Borromeo, almost all guests were members of the Orchestra Sinfonica di Milano Giuseppe Verdi, which happened to have performed the opera we had been attending. How I love those converted or lapsed monasteries and convents. Bipolar reality – the Spartan lack of space divided by a chastising cot, on the one hand, and the view of splendor, on the other. Even the tiny rooms each had a music stand.
Not only did I meet musicians that weekend, but I met a singer, a makeup artist and a designer. And I met special aficionados of the festival, the musically devout.
Indeed, so many sweet encounters and some aristocratically arrogant ones. The bus driver let me off in front of the hotel, unsolicited. A couple escorted me to the place I sought. Yet a loud privileged family talked all the way through a theatre production and, when I protested, they said "We want to talk" as if I was interrupting them in their own livingroom.

If it is humanly possible and you don’t like music, or don’t care for art, you can still enjoy the atmosphere of the most elegant town in Umbria. It hasn’t the mysterious perambulations of lavishly labyrinthine streets of Perugia. It is quainter, yet boasts a great Roman amphitheatre, 1st century Roman homes, groomed gardens.
The Festival was another huge success. But, could it have been better? The first and only criticism I have is the lack of international sense. On a technicality, the Festival is called “due mondi” (two worlds), but I mainly saw one, Italy.

The Press Office was highly professional. The volunteers earnestly offered their time to make things go smoothly. And yet,  the website is full of translation errors, as are most Italian exhibits: “150 years for an only Country. But centuries and centuries for its thousands of places, for its thousands of quarters. And everywhere the beauty enclosed in the stones, the theatrical reality of life, the harmony of sounds always new.”

While opera fans expect to hear other languages (remedied by surtitles, subtitles and signs near one's seat, even in posh places like Vienna), the synopsis and programmes should at least be in English to allow the public to know the play's action.

The tremendously talented film and theatre actor Filippo Timi brought his Umbrian dialect to Romeo and Juliet and the wonderful intense and cerebral actor Massimo Popolizio recited Calvino, yet who but Italians could appreciate them? Where, indeed, are the two worlds? The "Two Worlds" in the festival’s name comes from founder Gian Carlo Menotti's intention to have the worlds of American and European culture facing each other; this concept would be strengthened by the fact that Spoleto’s twin city of Charleston, South Carolina holds a cultural festival in May/June.  But where is the connection?

Does Italy need to be more international or simply preserve its own culture, and broadcast it more to the world? Can it do more to reach out to a non-Italian audience? I simply wonder. Music and dance live without geography or language, but theatre, poetry and lectures obviously cannot.

Yet come anyway to the festival. In the fulfilled promise of summer sunshine, the  sultry cozy autumn, and charcoal winter, Spoleto is a wonderful world.