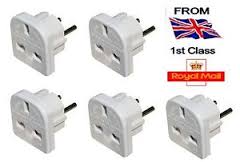 ROME -- When it comes to trying to understand the issues surrounding “Brexit,”—migration, sovereignty, taxes, competitiveness—it seems that no one never mentions the obvious. That is, well, the plain and simple fact that Britain has never really been very European. And nor does it really want to be. Britain is British, and the Continent is Foreign. Forget their quirky need to drive on the left and to retain their own currency. In order to really understand a sense of British identity, all one needs to do is look at their electrical plugs.

As an American who lives in Rome and travels frequently, I am continually reminded of England’s resolute desire to remain an island when I have to pack a blow dryer each time I visit the Septre’d Isle. My blow dryer is light and compact. But the British plug at the end of the cord is anything but. A large, awkward triangle that takes up a considerable amount of space both in a suitcase or plugged into the wall socket, the British electrical plug is serious, grounded, and maladroit. It is not easily connected to a European adapter without protruding clumsily into the room, and inserting a European plug into a British adapter somehow reduces the power of the foreign electrical device.

The European plug, however, has a slim profile and its understated two prongs glide easily into the socket without drawing too much attention to itself. It is confident without being assertive, functional but balanced in its proportions.  It also allows for communal action. When you need more access to power, you can use a multi-plug, a little device that can create a nest for three or four plugs, sharing the power among your lamp, your phone charger, and your laptop. It is efficient, but its overcrowding can threaten the whole system, not unlike the bus system in Rome.

The British plug demands a bit of isolation. With its three flat prongs, there is usually only room for one plug at a time. You can buy a multi-plug that allows you to plug various devices into a plank-like unit, which forms an orderly line of solid plugs along the wall. This device suggests nothing of the dangers of collective power that might shut the whole circuit down, as each plug is neatly in its place, grounded with its own solid third prong. The system is safeguarded against excess, functioning much like an orderly English queue outside a public restroom.

Just in case you are given over to excess or reckless behavior, don’t try it in a British bathroom. Should you want to blow dry your hair in the same room you keep your brushes, combs, and Argan oil, you can just forget it. The British electrical system simply doesn’t trust you to use your blow dryer in a room where you might accidently electrocute yourself. The only plugs available in British bathrooms are for shavers, which apparently are not life threatening in terms of wattage, but any device that requires real power—a curling iron, for instance--is right out. I can blow dry my hair in the bathroom of every European capital I visit, but in Britain you simply cannot be trusted with the wanton use of electricity. This vice might one of the issues at the root of Brexit.  They are fed up with the risky ungrounded use of electrical devices from the Schengen zone.

I don’t want to get overly ideological here, but given that electrical plugs the world over have more or less the same function, we can assume that the various forms cannot be accounted for in purely utilitarian terms.  Each involves a certain ideological perception of how the subject should relate power.

Hegel was among the first to propose that the geographical triad of Germany, France and England suggested an expression of three different existential attitudes: reflective thoroughness (German), revolutionary hastiness (French), utilitarian pragmatism (English). This might point to the impossibility of the European project. But given that Germany and France use the same kind of electrical plug, I am not exactly sure what to make of it.

However, thinking about this triad in our domestic domain, we can see its underlying mechanism in the different European attitudes towards power and its use: it is either a risky affair that must be managed and regulated, or it is a rather anarchic activity that meets users’ needs until everything blows up.

It is easy for an academic or a politician to sit around a table and discuss the world’s enormous problems, but the moment she wants to wash her hair after a heated discussion, she is faced with the bare ideology of a blow dryer. With the wrong plug there is no access to power.

Lisa Colletta is Dean, Academic Affairs and Professor of English at The American University of Rome