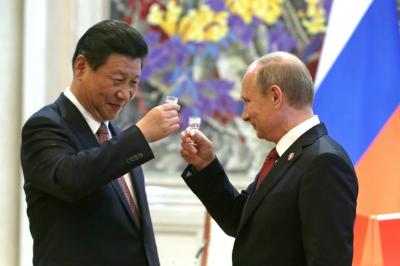 ROME -- No mention in the media of the dangerous increase in tension between Europe and Russia. But Nato has just made operational in Romania a missile system, the ABM, which the US has declared will protect from “rogue” states, like Iran.

Russia, especially after the agreement reached with Iran on the control of its atomic industry, is convinced that the system is intended for use against its military forces. The US has announced it will build another second site in Poland in 2018.The intention is to move from “reassurance” of eastern Nato allies to “deterrence” of the Kremlin. That means more troops and equipment, longer deployments, bigger exercises, and a “persistent” presence of Nato and American troops in countries like Poland and the Baltic countries.

In June, as many as 12 000 American troops will join servicemen and women from a number of European allies in Poland for an exercise called Anakonda, which will be the largest military exercise in Europe for years. Altogether, 25 000 troops from 24 Nato and partner countries will be involved. The US Deputy Secretary of Defence, Robert Work, has announced that 4 000 Nato troops, involving two US battalions, will be moved to the Russian border, permanently:” The Russians have been doing a lot of snap exercises at the border, with lots of troops – extraordinarily provocative behaviour”. Germany is to provide one battalion.

For a long time, the official UD line in military circles was to see in Russia a regime intent on aggression, after the annexation of Crimea, and the intervention in Ukraine. When General Ray Odierno retired as Chief of Staff, he declared, “Russia is the greatest threat to the United States of America”. His predecessor, General Joseph Dunford, was more specific. He thought the then USSR was a bigger threat than ISIS. Odierno said that as a result, he saw threats to Estonia, Latvia, Lithuania and Ukraine.

It is useful to remember that Putin began his tenure by continuing Boris Yeltsin’s line of total cooperation with the United States. As George W. Bush famously said: “I have seen inside Vladimir Putin eyes, and finally we have a strong ally for US interests”. But then Bush took a number of actions without consultation that convinced the Russian that he was considered a marginal player.

While it is obvious that Putin suffers from paranoia, and uses confrontation to get popular support, it would be wise to see matters also from the Russian viewpoint. To begin with, it has been established behind doubt that Mikhail Gorbachev agreed not to intervene militarily in the European countries that were under USSR dominance, provided that NATO kept existing borders.

The fact that this agreement was not maintained has always been present in the Russian psyche. When Reagan met Gorbachev in Reykavik in 1986, Putin was in his mid-30s, and the Soviet Union stretched from the river Elba to the Bering Strait, and from the Artic to Afghanistan. The USSR was a superpower, present in Africa, the Caribbean and Central America, with important allies in Asia.

When Putin turned 40, his country had splintered into 15 separate. And when he came to power in 1999, the USSR had lost one-third of his territory, and half of its population. Kazakhstan, Tajikistan, Uzbekistan, Kyrgyzstan, Turkmenistan, Georgia and Azerbaijan were gone. Nato continued its endless habit of encircling Russia. After he persuaded Kiev to join a Moscow –led economic union, Putin saw the Ukraine-pro Russian government overthrown in a US backed coup. The encirclement continues today, comprising even militarily insignificant countries like Montenegro (some 3,000 soldiers), to join Nato.

“Russia has not accepted the hand of partnership “says Nato Commander, General Philip Bredlove, “ but has chosen a path of belligerence”.

Well, it is significant that an impressive 80 percent of the Russian population shares Putin’s paranoia, and does not see the “hand of partnership”. When Putin annexed Crimea and invaded Ukraine, his popularity increased at home dramatically. Also because Crimea was always part of Russia, until Nikita Khrushchev donated it to Ukraine, in a symbolic move in 1954. The 65 percent of Crimeans were Russian speakers, as those living in the Eastern part of Ukraine, a country that was created by joining western Crimea, which was part of the Austro-Hungarian Empire, with eastern Ukraine, which was part of the Russian empire. Putin very adroitly said that his task was to protect “Russian citizens, wherever they live”, and this struck a chord with Russian people.

It should be made clear that there are no excuses in legal terms for Putin’s actions. But in real life it is always useful to look into events by taking into account both sides of the story. And the fact is that Putin reached the conclusion that Russia was considered, in US jargon, “just a regional power”, and that to be admitted into the G7 and other similar Western fora was not giving him an opportunity to have Russia and himself considered an important player, he thus decided to take the path of confrontatio, in order to be taken seriously. He put a knife in a side of the West, by dividing once again the two halves of Ukraine, obliging the West to sink hundreds of billions of dollars to sustain a deeply corrupt government in Kiev, and its ability to turn the knife when he wanted.

This move led to the establishment of sanctions by the West in 2014, with the declared goal of having Putin capitulate and abandon his intervention in Ukraine. But then, Putin again intervened outside its borders, by intervening in Syria, where since Stalin’s time, Russia has a naval base. The arrival of Russia has completely changed the situation in Syria, and now everybody agrees that there cannot be any military solution without Russia’s agreement.

Is Russia still “ a regional power”, or has it become again a global player?

Of course, one key principle behind US foreign policy is that nobody should challenge its power. Yet it is a principle, which is becoming increasingly unrealistic, as the emergence of China shows. But in the American psyche the USSR is gone, and any attempt to recreate it, under any guise, is just a provocation. And while China has not yet had a direct clash with the United States, Crimea and Ukraine were a slap on the hand…

Now, seen from outside the western world, as many analysts have pointed out from Latin America and Asia, this situation does not make much sense. Let us take the sanctions. They have cost over US$100 billion in lost exports to Russia. But this figure hides a difference: the US exports to Russia dropped by 3.5 percent, while for Europe 13 percent, especially from the fragile European agricultural sector (which fell by 43 percent). Imports from Russia in Europe fell by 13.5 percent. According to the European Commission, the EU’s gross domestic product (GDP) is going to drop by 0.3 percent in 2014 and 0.4 percent in 2015 due to the sanctions. But that is a quite a considerable draw, considering that European growth is expected to be just 1.5 as an average, with countries, like Italy, barely over one percent.

Meanwhile a new trend is developing, seemingly ignored by the media. Since 2014, Russia has been deepening its partnership with China, with which it traditionally had difficult relations. The Chinese economic slowdown, due to its change of economic model based on export now to one based on internal market expansion, does not make this the best moment for economic cooperation. Yet, Russia and China have just signed a US$25 billion deal to boost Chinese lending to Russian firms, and a host of other accords. Russia has agreed a US$400 billion deal to supply China with 38 billion cubicmeters of gas annually, from 2018 for the next 30 years.

Russia’s Sberbank has received a US$966 million credit line from the China Development Bank. China is launching a US$2 billion-investment fund, targeting agricultural projects. And US$19.7 billion will go to open a rail link between Moscow and the Russian city of Kazan. At the same time, Russia agreed to cancel it ban on weapon’s sale to China, and a deal was done for the sale of an S-400 air defence system to China (to the great annoyance of the United States and Japan), for US$3 billion with another US$2 billion for the sale of 24 Su-35 fighter planes. The two countries declared that they would increase their bilateral trade to US$200 billion by 2020.

But what is totally new and important is that both countries also decided to strengthen military cooperation. This year they will join in a Joint Sea-2016 naval drill, hosted by China. Deputy minister of Defence, Anatoly Antonov has declared: “Military cooperation between the two countries is highly diverse, and has improved significantly over the last three years .A more tight interaction between the military departments corresponds to national interests, and we expect this interaction to increase”.

This should really lead Europeans to pause and reflect. Is it in the interest of Europe to keep pushing Russia into the hands of China? Or suggest a European initiative – over US priorities, is it not time to search for a settlement with Russia, that would include the Ukraine, Syria, and an engagement to end “deterrence”, for an agreed status quo, which would reopen trade and cooperation, and satisfy the frustrated ego of Russian citizens? It should be recognized that even between allies like the EU and US sometimes there are different priorities, without being traitors…Maybe the American elections will change all the rules of this game.