Renzi keen to discuss migrants at G7 summit in Japan 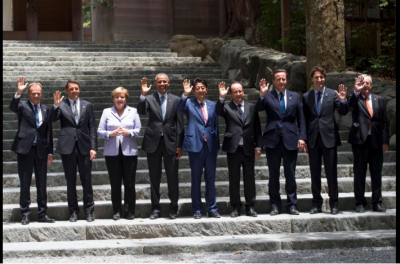 ROME -- Some of the world’s most influential leaders were set to meet on the Ise-Shima peninsula in southern Japan on Thursday and Friday for a G7 Summit.  Japanese Prime Minister Shinzo Abe chose the Ise-Yingu temple to open the summit, as a symbol of Shinto and Imperial Japan.

The first session was scheduled as a working lunch to discuss world economy issues, with a focus on growth and the weak recovery.  After lunch was a session of trade and then a round table conference dedicated to foreign policy, with a focus on the Asian situation.  This is the point where the situation in North Korea will also be addressed.

The official dinner on Thursday evening was also scheduled to focus on the theme of foreign policy, with particular emphasis on migrants – a discussion topic particularly favoured by Italian Prime Minister Matteo Renzi, as Italy struggles to keep up with the heavy flow of migrants into their country via international waters.  Renzi had landed in Japan reiterating his willingness to put the issue to the table of leaders.

Discussions on Syria, Iraq, Libya and Ukraine were also expected.  Friday morning is set to be the finalisation of the final declaration and the addressing of the issues of climate change and energy, before the leaders move on to a session on stability in Asia.  At the farewell lunch health, women, and infrastructure are expected to be the topics of the day.

The leaders from Italy, Germany, the UK, France and Canada will be leaving Japan on Friday afternoon, as Barack Obama stays on for a historic visit to Hiroshima.  He will be the first US President in office to visit the site of the nuclear holocaust.

Renzi posted on Twitter on his landing, “I’ve arrived in Ise-Shima and will be bringing the pride and dignity of the Italians who save lives at sea to the table.”  To accompany the words were photos of the rescue operations carried out by the Navy, the Lampedusa doctor Pietro Bartolo, and the summit.