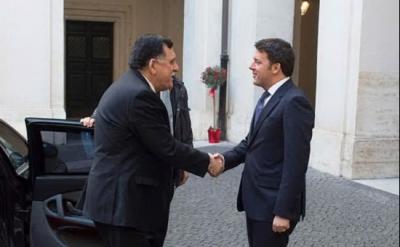 ROME -- Doubts have reportedly been raised over the initial promise of military intervention on Italy’s part in Libya after the request for help from their presidential advisor Fayez Al Sarraj.  After promising to send in troops, Italian Prime Minister Matteo Renzi is now saying that he doesn’t wish to be involved in a war between militias.

The premier’s initial line was that "We are willing to work with the government to Sarraj and confirm that the bottom line is that of a very strong relationship with Sarraj’s government, whom we need to support.”  He was also quick to point out that when "the requests of the international community are formalised, not just announced, the Libyan government will find Italy a sensitive partner."

The Italian Prime Minister has now changed his stance somewhat, stressing the point that Serraj and General Khalifa Haftar must reach an agreement, with the support of the Tobruk parliament, before he will consider sending in military resources.  Agreement seems a long way off, however, as Haftar has tried to gain independence in the East of the country by seizing the oil fields, giving the reason of attempting to protect them from Islamic State, and adding another contributing factor to the cry for help from Al Sarraj who reports that he needs military intervention to protect the oil fields both from IS and the General.

Another roadblock has also presented itself for Italy in the form of support given by France and Egypt to Haftar, demonstrated by a frosty reception at the UN summit on Tuesday between French and Italian delegations.  Italian defence sources have denied initial reports, however, that Italy has already delegated 900 troops for the mission to Libya, in an operation entitled LIAM, which is yet to be approved by the United Nations.