Comment: The new Turkey's role in the new Middle East 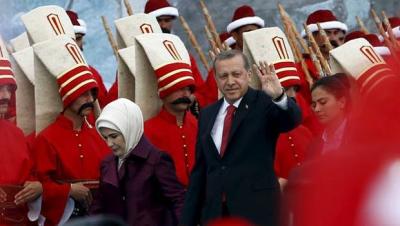 Turkish President Erdogan at anniversary celebration of the conquest of Istanbul May 29, 1453, the birthdate of the Ottoman Empire

ISTANBUL -- At the moment Turkey is in the news for all the wrong reasons . . . the  country just suffered a "third fatal bomb attack in five months," as put by the BBC. Three terror attacks have killed nearly 200 innocent bystanders. While, at the same time "Turkey’s leadership is clamping down on the media, the judiciary and increasingly its own Kurdish population (in the South East of the country)," as put by Carniegie Europe's Marco Pierini. [https://twitter.com/MarcPierini1]

But away from the international media glare, the dynamic duo Erdoğan-Davutoğlu and their AKP-led government continue to effect a radical overhaul of the nation state founded by Mustafa Kemal Atatürk. Approaching the first centenary of the Republic's foundation in 2023, the country's current leadership is working hard to dismantle the Turkish version of secularism that has been hailed as a role-model for the Middle East for many years.

Though Turkey never knew a strict separation of state and religion, the much-lauded "Turkish Secularism" was basically a state-controlled dissemination of religion in all of its aspects. The state was able to exert this control by means of its Directorate of Religious Affairs (or Diyanet,in Turkish), set up in 1924 and linked directly to the office of the Prime Ministry and part and parcel of the Turkish government machinery.

In early March, Turkey's parliament (TBMM) accepted the government's proposed budget for 2016. The most striking aspects of this year's budget are the increase in funds allotted to the National Intelligence Organization (or MİT), in the first instance, and to the Diyanet in the next.

Elsewhere I have observed that recently adopted legal provisions in Turkey have transformed the MİT into a veritable Praetorian Guard, at the beck and call of Prime Minister Ahmet Davutoğlu and President Recep Tayyip Erdoğan. [http://journal-neo.org/2016/01/21/turkeys-praetorian-guard-and-its-missi...

According to opposition politicians, these changes have turned Turkey into a "just another typical Middle-Eastern 'Mukhabarat state,' a state where official intelligence services are busy keeping taps on the people while developing all kinds of nefarious cross-border activities embroil the country in all kinds of dodgy affairs and/or relations." In fact, these observations have led some to talk about "Ankara's Orwellian Reality," in view of the new powers wielded by the MİT [http://sputniknews.com/politics/20160121/1033511006/erdogan-converting-t... -- powers that still seem unable to prevent terrorist attacks.

Budgetary discretion apportioned the MİT with a whopping 47 percent increase in funds, so that Turkey's Praetorian Guard now disposes of as much as TL1.6 billion. But the increase in the Directorate of Religious Affairs' spending power is what really discloses the true portent of the New Turkey. This year, the Diyanet namely received a 12.8 percent increase, corresponding to the sum of TL6.5 billion.

The Deputy Prime Minister Lütfi Elvan explained that "an important part of this increase [in the Diyanet's allotment], is [made up by] the additional payments for personnel expenses." In other words, the Directorate of Religious Affairs seems set to be hiring more people able to take care of the Turkish populations' souls in the coming months.

The current head of the Diyanet, Mehmet Görmez recently told the press that "at the moment, looking at our region, religious services are a matter of security. In a world like this, the presence of [the] Diyanet, which fulfils its services in 85,000 mosques in Turkey five times a day and every Friday and conducts all other [beneficial] works [as well], has gradually become more important. Five years later, it will become even more important. If we take the developments in the region into consideration, 10 years later, we will be in even greater need of this institution as the country and as the surrounding areas develop."

AKP-led Ankara is thus clearly hoping to transform the nation state of Turkey into a leading Muslim power once again, a leading power able to utilize its "strategic depth" as the successor to the Ottoman Sultanate of yesteryear .

Dr. Can Erimtan is an independent scholar residing in İstanbul, with a wide interest in the politics, history and culture of the Balkans and the Greater Middle East. He attended the VUB in Brussels and did his graduate work at the universities of Essex and Oxford. In Oxford, Erimtan was a member of Lady Margaret Hall and he obtained his doctorate in Modern History in 2002. His publications include the book “Ottomans Looking West?”