Can Europe Survive – Back to a Better Yesterday? 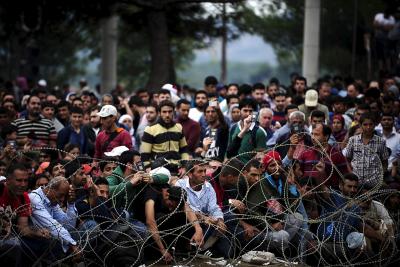 Migrants on the Greece-Macedonia border

ROME -- The last formal act of European disintegration was the last negotiation between 28 European leaders and the Prime Minister of Turkey. The deal, against all international treaties, is a total capitulation of European values. Europe will give Turkey 6 billion dollars, and in exchange Turkey will keep refugees from coming to Europe. Or better, will screen everybody, and send to Europe only the Syrians who are eligible for political asylum.

This is just a way to avoid a common position on the refugees. In fact, besides keeping people out, as the President of the EU, Donald Tusk, has explicitly warned “ keep out, you are not welcome”, there is no European policy on this issue at all. The 28 did approve by majority a plan of resettlement for 60 000 refugees (a drop in the more than a million stranded in Europe).

After seven months, a grand total of 600 refuges have been settled. And some countries, like Hungary and the Czech Republic, have announced a referendum on the issue of accepting refugees. Clearly an illegal move, as the decisions of the Council of Ministers, once democratically taken, are binding for all members.

But Europe is facing three internal horses of the apocalypse, and a fourth external one, which is even more ominous. All this is coming together, and all the odds are against the dream of an integrated Europe.

The first is the divide between Eastern and Western Europe, which comes just after the North-South divide. The North-South divide was over the austerity that Germany and other protestant countries wanted to impose over the catholic and orthodox south. The chosen battleground was Greece, and the South lost. A very inflexible German Minister of Finance, Schauble, even went so far as to veto any program for growth at the last G20, and has just declared that Greece, flooded with refugees, “should not get distracted from its task of reforming its economy”.

Germany has been blocking any program of fiscal solidarity that could have meant a German contribution. Nothing has changed on this issue. The only exception will be for costs related to defence and security, following the terrorist attacks in Paris. But this divide has been totally superseded by the divide East- West.

The tide of migrants has made evident something that everybody has long and conveniently ignored: Eastern Europe joined European institutions to receive benefits, not obligations. They consider that Western Europe must give them the means to eliminate the economic and social gap, created by the Iron Curtain. And if Soviet domination has disappeared, it is due to the United States, and not Europe. Suddenly, Europe is asking to take refugees escaping from conflicts in which they are not directly involved like Syria and Libya, which are basically west European affairs?

What nobody wanted to see is that Eastern Europe is veering toward nationalism and xenophobia, or against the founding values of European integration. First we had the Hungarian government declaring its opposition to the democratic values of Europe. Then we had Poland, the single largest beneficiary of European funds in history, voting for an anti-European and authoritarian party, against homosexual and antichristian values of Europe.

And all over Eastern Europe, we have a clear tide of revolt against the supposed European values: solidarity, democracy, participation, social inclusion. Nato is the point of reference, as it is an American led alliance against an expansionist Russia. Nobody appears to give a thought to the absurdity of inviting Montenegro to the alliance, with its army of 3 000 soldiers. And in every single election in the last few years, the right wing parties have been consolidating. Last week a pro Nazi party obtained 14 seats in the Slovak elections.

But the decline of democracy is the second horse of the apocalypse riding European skies. In Germany this month it is possible that the Anti-europe party, ADF, will see a strong presence in the three regions where elections are being held, and in direct threat to the Socialist Party.

There is no single European country (with few exceptions like Spain, where the PP can encompass all right wing positions), where right wing and xenophobic parties have not grown since the 2009 crisis, and often are the tipping point in national parliaments. With coming elections, a tidal shift will happen all over Europe. The shift will be to the right, even in countries that have been examples of tolerance and inclusion, like the Nordic countries and the Netherlands.

Europe is now just a collection of 28 countries, each one with its own national agenda as a priority. Individually, they have resorted to a number of illegal measures, like building walls and barbed wire containment, without any European coordination. Austria has gone so far as to see if it can resurrect the old Austro-Hungarian empire, calling for an alliance between its old member countries, and the Balkans, with the exception of Greece, this last being currently and de facto the most involved in the subject of migration.

The sad episode of refugees trying to cross the border with Macedonia border, only to be repelled by a volley of tear gas grenades, was viewed with relief in Austria. And while individually every country tried to duck the issue of refugees, collectively they have made a deal with Turkey which has itself been condemned by the United Nations, and any number of legal experts. This deal occurred just a few days after Prime Minister Erdogan, sensing that Europe would have as priority her own comfort, would ignore his last attempt to take full control of Turkey, by taking over the largest daily newspaper, Zeman. He already controls the judiciary, the legislature, and the central bank, in a economy that is clearly run by his cronies.

Yet Europe has accepted to reopen the process of admission of Turkey to the EU, a country which was formerly considered too removed from European values, and that was before Erdogan’s rise to authoritarianism.

The third horse is clear to everybody. Europe has bent its rules to accommodate the UK’s David Cameron’s request to be an exception, in order to convince British citizens to remain in Europe. It is far from clear if that manoeuvre will succeed. And Cameron has declared that he will no longer recognize the European Court of Justice. He does not recognize either Europe as competent to assign refugees to the UK. But if the referendum on keeping the UK in Europe should fail, this would be total loss of legitimacy for Bruxelles, and the concessions to Great Britain would open a massive precedent that other members might be tempted to follow.

In all this there is an external threat, the forth horse of the apocalypse, which is over European heads. And is Europe in the world. In 1900, Europe constituted 24 percent of the global population. At the end of this century, it will make up only 4 percent. This is accompanied ofcourse by a decrease of European relevance in the world. In the United States of America, that has led to the unprecedented phenomenon of Donald Trump. Here, to the growth of right wing parties and movements. The winning argument is about a better yesterday…Let us go back to the time when we were powerful and rich…let us eliminate all those treaties which have reduced my power as a nation, and made me dependent on external banks, bureaucrats and values…Trump? Not at all, the Prime Minister of Poland…

The world, and especially Europe, is entering into a period of economic stagnation. That means that there is little to redistribute, and this is the basis of social democracy. Crisis plays into the hands of the right, as history tells us. The idea of an integrated Europe, with a strong social component, was somehow a progressive idea. Nationalism and xenophobia are returning. Let us thank the neoliberal vision of markets as the most important actors in society, the imposition of austerity and an end to solidarity as the new trends emerging from rich European countries.

Roberto Savio, founder and president emeritus of the Inter Press Service (IPS) news agency and publisher of Other News