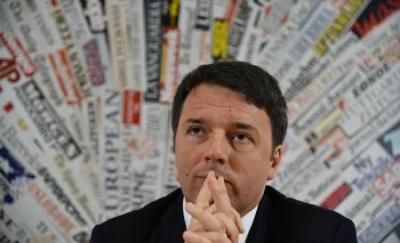 ROME -- In a press conference Monday Italian Prime Minister Matteo Renzi said Brexit would be “much more of a problem for Britain than for Europe.”  Other topics covered included the European Union Summit held in Brussels on Thursday and Friday, Italy’s standpoint on immigration, the Civil Unions Bill, and Renzi’s upcoming meeting with French President François Hollande.

After the EU vote to grant Britain ‘special status’, Prime Minister David Cameron called a Cabinet Meeting – the first on a Saturday since the Falklands War in 1982.  “I’ve got enough problems with Italian politics to answer questions on British politics!” joked the Italian premier, when asked for his view, though he answered the question in depth. “David [Cameron] is a great organiser,” stated Renzi, “I wish him the best of luck and I hope he wins.”

On Friday, Cameron told a press conference that he will “be campaigning with all my heart and soul to persuade the British people to remain in the reformed European Union that we have secured today.”  This statement came before the Mayor of London Boris Johnson spoke out in favour of Brexit, the UK’s exit from the EU, which has left the Prime Minister in a sticky situation.  The Brexit vote will be taking place on June 23.

Later on in Monday’s press conference at the Foreign Press Association Headquarters in Rome Renzi expanded saying that if Britain were to vote to leave the EU in the referendum, “the first problem would be for them and their financial situation.”  He expressed the opinion that the UK would have a far larger problem out of the EU than the EU would face without them, "If the UK leaves Europe the main problem will be for the UK, for their agenda and their citizens.  To stay in the EU would be particularly beneficial for them."  He said he did believe though that if the United Kingdom were to leave the EU, it would be the start of a crisis for Europe and all that the Union stands for.  “Europe was born for an ideal, not to spread out the deficit.”

This was particularly emphasised in reference to the immigration situation and Austria’s new decision to limit the number of migrants who can enter the country each day.  Renzi’s view was that “solidarity cannot be a one-way street,” whilst, “we must work together on the question of immigration.”  He believes the priority is to “invest in international cooperation” as well as the “agriculture, infrastructure, and work opportunities in the immigrants’ home countries.”  This information came in response to a question regarding how the EU Summit in Brussels had gone, and Italy’s view on Turkey.

“There’s a lot to do,” the Italian premier admitted, “it’ll take years, not days.”  He also let slip that there would be an announcement on the next step in Italy’s new infrastructure for a system of integration for newly arrived immigrants within the next week.