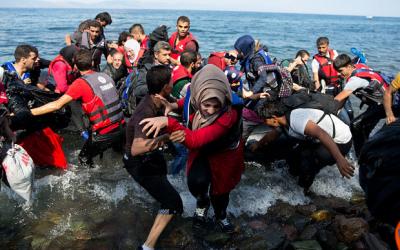 The millions of refugees arriving in Europe are met with a mixture of apathy and hostility.

ROME -- We are witnessing the slow agony of the dream of European integration, disintegrating without a single demonstration occurring anywhere, among its 500 million citizens. It is clear that European institutions are in an existential crisis but the debate is only at intergovernmental level.

This proves clearly that European citizens do not feel close to Brussels. Gone are the 1950s, when young people mobilized in the Youth Federalist Movement, with activists from the Federal Movement led by Altiero Spinelli, and the massive campaign for a Europe that would transcend national boundaries, a rallying theme of the intellectuals of the time.

It has been a crescendo of crisis. First came the North-South divide, with a North that did not want to rescue the South and made austerity a monolithic taboo, with Germany as its inflexible leader. Greece was the chosen place to clash and win, even if its budget was just four percent of the whole European Union. The front for fiscal discipline and austerity easily overran those pleading for development and growth as a priority and it alienated many citizens caught in the fight.

Then came the East-West divide. It became clear that the countries which were under the Soviet Union joined the EU purely for economic reasons and did not identify with the so called European values, the basis for the founding treaties. Solidarity was not only ignored, but actively rejected, first with Greece, and now with the refugees. There are now two countries, first Hungary and now Poland, which explicitly reject the “European model and values,” one to defend an autocratic model of governance, and the other Christian values, ignoring any declarations emanating from Brussels.

At the same time, another ominous development emerged. British Prime Minister David Cameron used threats to get special conditions, or in order to leave the EU altogether. At Davos, he explicitly said that Britain was in the EU for the market, but rejects everything else, and especially any possible further integration. German Chancellor Angela Merkel has been sending soothing signs, and all European countries are in the process of trying to recover as much sovereignty as possible. Therefore, whatever Britain may get in the end will serve as a benchmark for everyone else. It is revealing that in Britain, the pro-Europe lobby is run by the financial and economic sector, and there is no citizen’s movement.

All this is happening within a framework of economic stagnation that even unprecedented financial injections from the European Central Bank have not been able to lift.

The list of countries in trouble does not cover only countries from the South. Leaders of fiscal rectitude, like the Netherlands and Finland, are in serious difficulty. The only country which is doing relatively well, Germany, enjoys a positive trade balance with the rest of Europe and has a much lower rate of interest mainly due to its generally better performance; it has been calculated that over half of its positive budget comes from its asymmetric relations with the rest of Europe. Yet, Germany has stubbornly refused to use some of these revenues to create any pact to socialize its assets, like a European Fund to bail out countries, or anything similar. Hardly a shining example of solidarity. As its minister of finance, Wolfgang Schauble, famously said, “we are not going to give the gains that we have sweated for to those who have not worked hard the way we have…”

Finally, the refugee crisis has been the last blow to an institution which was already breathing with great effort. Last year, more than 1,3 million people escaping conflicts in Iraq, Libya and Syria arrived in Europe. This year, according the High Commissioner for Refugees, at least another million are expected to find their way to Europe.

What has been happening shows the European reality. The Commission determined that 40,000 people, a mere drop in the ocean, should be relocated from Syria and Ethiopia. This led to a furious process of bargaining, with the Eastern European countries flatly refusing to take part in spite of threats by the Commission. As of today, the total number of people who have relocated is a mere 201.

Meanwhile Angela Merkel decided to open Germany up to one million refugees, mainly Syrians. But a smart interpretation of the Treaty on Refugees made clear that economic refugees (as well as climate) were excluded, and it was then declared that the Balkans were safe and secure, thereby excluding any Europeans coming to Germany by way of Albania, Kosovo and other countries not yet part of the EU.

It is interesting that, at the same time, Montenegro was invited to join NATO, which by coincidence also serves to increase the containment of Russia, thanks to a standing army of 3,000. But of course, the flood of people made it difficult to process the paperwork required and so each country was forced to resort to its own way of doing things, without any relation with Brussels.

Austria declared that it would admit only 37,500 asylum applications.

Denmark, besides creating a campaign to announce to refugees that they were not welcome, passed a law that delays family reunification for three years and allows the authorities to seize asylum seekers’ cash and jewels exceeding the value of US$1.400.

Sweden announced that it would give shorter residence permits, and that strict controls will be imposed on trains coming from Denmark.

Finland and Holland have indicated that they will immediately expel all those who do not fit under strict norms as refugees. Great Britain, which was responsible together with the United States for the Iraq invasion (from which ISIS was born) has announced that it will take 27,000 refugees.

There has been a veritable flourishing of wall construction, constructed in Hungary, Slovenia, Slovakia and Austria. Meanwhile Europe tried to buy the Turkish president Recep Tayyip Erdogan with three billion euros, as a way to stop the flow of refugees, but it didn’t work. Now Greece is the culprit, because it was not able to adequately process the nearly 800,000 people who transited the country.

Austria has asked to exclude Greece from the Schengen agreement, and move European borders “further north”.  This chapter is now being concluded by the German initiative to once again introduce national border controls for a period of two years. Last year, there were 56 million trucks crossing between countries, and every day 1,7 million people crossed between borders.

Eliminating the Schengen agreement for free movement of Europeans would be a very powerful signal. But more critical are the imminent political changes which see anti-European and xenophobic parties all riding the wave of fear and insecurity crossing Europe.

In Germany, where Angela Merkel is increasingly losing support, the Party for an Alternative which has been relatively marginal could achieve representation in at least three provinces. Across Europe, from France to Italy, from Great Britain to the Netherlands, right wing parties are on the rise.

These parties all use some form of left wing rhetoric: “Let us renationalize industries and banks, increase social safety nets, fight against neoliberal globalization…”

Hungary has heavily taxed foreign banks to get them to leave, and Poland is using similar language. Their target is very simple: the unemployed, the under-employed, retirees, all those with precarious livelihoods, those who feel that they have been left out of the political system and dream of a glorious yesterday. If it is working in the United States with the likes of Donald Trump, it will work here.

Therefore, there is no doubt that at this moment a referendum for Europe would never pass. Citizens do not feel that this is ‘their’ Europe. This is a serious problem for a democratic Europe.

Will the European Union survive? Probably, but it will be more a kind of common market for finance and business rather than a citizen’s project. It will also hasten the reduction of European power in the world, and the loss of European identity, once the most revolutionary project in modern history.

Roberto Savio is an Italian-Argentine journalist and co-founder and former Director General of Inter Press Service (IPS). In recent years he also founded 'Other News', a service that provides “information markets eliminate”.