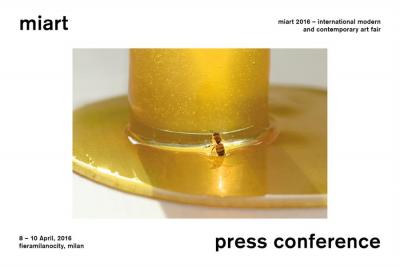 MILAN -- From April 7 to 10 Milan will open its doors, and indeed its streets, to the MIART fair, which aims to celebrate the art of Milan.  154 international galleries, from over 16 countries, will represent the best of modern and contemporary art and limited-edition design in this highly anticipated event that will take place in fieromilancity.  With the preview on April 7, the week will include encounters, openings, exhibitions and events all over the city.

Organised by Fiera Milano and directed by Vincenzo de Bellis, this 21st edition of the international fair of modern and contemporary art of Milan, will include a new ‘Decades’ section offering the option of following an itinerary that will take you through the 20th century decade by decade, focusing on modern and contemporary art, particularly of the period after World War II in Italy, which holds a particular interest for the international market.  In addition to this we will find the four sections that have made MIART the international event it is today.  These include: Established, which, divided into Master and Contemporary, will exhibit works by historically acclaimed artists; Emergent will concentrate on the work of the younger generations; THENnow, which aims to create dialogue between an older work and one from a more recent period; and Object, promoting contemporary design objects, which have been created in limited-editions and viewed as works of art.

Working with the City of Milan, MIART will be an integral part of contemporary art week within the city, which will begin on April 5.  Each day there will be exclusive events and openings held in various public and private spaces around the city.  This will be kicked off with the 21st Milan Triennale – “21st Century. Design After Design” and will continue with openings at the Palazzo Reale for Studio Azzurro and at HangarBicocca for the solo show by Carsten Höller, the opening of Fondazione Carriero’s second exhibition and of the new FM Center for Contemporary Art.  In addition to these Fondazione Prada will be operating on special opening times, special visits will be arranged to the exhibitions in progress at Palazzo Reale – 2050 and the shows on Umberto Boccioni and Symbolism, and special hours with guided visits will be kept at PAC, GAM, Palazzo della Ragione and MUDEC, amongst thousands of other events being arranged across Milan to capture some of the energy and vitality that was ignited in the city by Expo 2015.

Accompanying the three days that the fair is open to the public will be a series of MIARTALKS, produced in collaboration with In Between Art Film and coordinated by Ben Borthwick, artistic director of the Plymouth Arts Centre.  These will be made up of a series of lectures, conversations and interviews involving over 40 prestigious international personalities throughout the art world including curators, artists, directors of museums and film festivals, collectors, filmamakers, choreographers and producers who are invited to look at the relationship between the visual arts and the worlds of experimental cinema, music, video, theatre and dance.

There will be several prizes available including those for the best emerging gallery, the Emergent Prize, the Premio Rotary Club Milano Brera for contemporary art and young artists, and the Premio Herno which will be assigned to the booth with the best exhibition project.