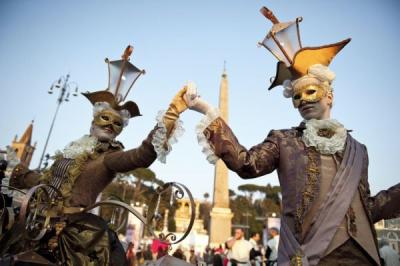 The annual celebrations take place all over the city

ROME -- January and February are each year witness to the country-wide Carnevale celebrations, which will be taking place here in Rome to herald the first signs of Spring. This year, festivities are likely to be low-key given budget cuts eliminating much of the city's customary celebrations, but there will be no shortage of activities taking place at various venues around the city.

Parks, restaurants and clubs will be hosting events welcoming a range of ages, including a party in the garden of Largo Ravizza in Monteverde Nuovo on Sunday Feb. 7, from 10.30am - 1.30pm, with a costume fashion show, games, music, masks and prizes.

February is also the month of dance in Rome, with the annual Equilibrio Dance Festival bringing contemporary European dance companies to the Parco della Musica, as well as performances at the Teatro Vascello in Monteverde Vecchio.

The Jubilee celebrations at the Vatican continue, with the relics of Padre Pio of Pietrelcina and also of St. Leopold Mandic, a 19th-century Capuchin, being brought to Rome and displayed at San Lorenzo Fuori le Mura, at San Salvatore in Lauro, and finally at St. Peter's Basilica later this week and early next.

The "settimana bianca", when Romans take a "white week" to go on vacation to the snow, is also a February tradition. It is not uncommon to see lines of cars loaded with ski equipment stretching along the motorways towards higher climbs.   ft