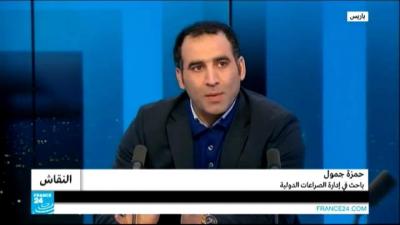 Hamze Jammoul in a recent interview with France 24

CAGLIARI - The occupied Palestinian territories are witnessing  growing individual armed operations known as the 'knife rebellion' - an expression of popular anger against what is seen as Israel’s Zionist policy. These events have renewed  political and intellectual debate about the kind of resistance to be adopted  in order to obtain Palestinian rights, either military resistance or non – violence.

Within this framework, the following questions are raised: is it possible to bring together  military and non–violent resistance? Could non–violent resistance achieve Palestinian political and economic aims? In this article, I will discuss a recent academic publication co-authored by Dr. Marwan Darweish and Dr. Andrew Rigby from Coventry University, published by Pluto Press, entitled 'Popular Protest in Palestine - The History and Uncertain Future of Unarmed Resistance'.

Several events in the past years have contributed to increasing mistrust between the Palestinians and their leaders. In fact the failure of the Oslo agreements, the useless "peace negotiations", the political division between Hamas and Fatah and the instability in the Arab countries have all pushed Palestinians to feel that  they are alone in this battle.

On the other hand, however, the spontaneous nature of  Palestinian Popular Resistance raises doubts about its effectiveness. This encourages us to illustrate the challenges facing the Palestinian popular resistance and then to introduce a scenario of hope.

The challenges could be summarized as follows:

Weakness of the Popular resistance movement

The Palestinian Popular Resistance movement is characterized by a lack of effective strategy and inadequate coordination between the different socially and politically involved players. The absence of a strategy reduces the effectiveness of the popular resistance and trims down its ability to achieve the desired results.

In this context, Darwish and Rigby met several people in the Silwan community, noting that "a major challenge is the coordination of nonviolent activities. Some focus on the wall, others on checkpoints and other on settlements. There is no coordination like there was in the first intifada."

Mistrust between the leadership and the masses

The increased mistrust between the Palestinian and the leadership influences people’s involvement in non-violent resistance.

In this sense, the authors interviewed a group of people about the relation with the leadership, receiving replies like "I will not be a stepping-stone for people to climb upwards where I pay the price of participation and the leadership benefit and gather the fruits."

This mistrust between the leadership and the citizens threatens the most important  element of success of any popular resistance and contributes to the growing phenomenon of individual initiatives, such as the 'knife rebellion' or unarmed protests such as individual demonstrations that are not considered efficient.

For instance Palestinian Minister Ziad Abu Ein case was assassinated by the Israeli army during a demonstration on 2014 against the Israeli occupation.

Towards a Scenario of Hope

The challenge for the Palestinians is to develop a unified resistance strategy, one that envisions a role for all, whatever their gender, political persuasion, location or age.

At the core of such a strategy must be a sustained commitment by political leaderships at all levels  to build on the experience of the popular resistance of the post-second intifada period in order to create a situation where the occupation cannot continue as normal.

This means a situation in which the financial, political, diplomatic and economic costs become insupportable.

The ongoing events in Palestine confirm that Palestinians are ready to participate in an effective popular resistance, what they need is a clear strategy developed by a unified political leadership.

Hamze Jammoul is a Lebanese researcher in International Relations.   hz-ft