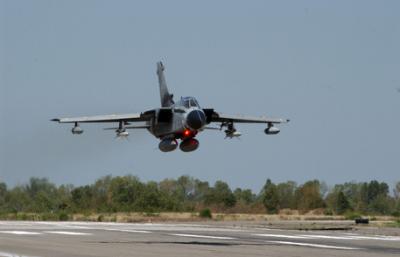 However, the use of Italian Tornadoes has been denied by the Foreign Minister, Gentiloni

ROME — Italian Defence Minister Roberta Pinotti has admitted to the Senate that Italy is considering sending Tornado planes to participate in the Western coalition against ISIS in Iraq, saying "we are looking into new and additional roles for our aircraft."

The initial decision to partake in this coalition took place only slightly less than a year ago. Four Tornadoes from the Sixth Squadron of Ghedi were sent to an airbase located in Kuwait.

A very important factor in the Italian decision to participate was the distinction between Iraq and Syria, where, in the European deployment, France has recently started bombing and Britain is waiting from the green light from its government. There is a fundamental difference here: the Iraqi government has asked for other countries to intervene, and even to bomb, whilst the Syrian government has only addressed this request to Russia. The military demands are very clear in Iraq, considering that the forces of ISIS occupy the whole area of the former border with Syria and are present in the province of Anbar, near the capital of Baghdad.

This Italian commitment will certainly be well received by the US Defence Secretary, Ashton Carter, who arrives today on a visit, first to Sigonella, and then on to Rome, where he will meet the President of the Republic.

However, the Foreign Minister Gentiloni has said that it was "just a hypothesis to evaluate with our allies and not a decision taken which, in case, will have to be pass through parliament”.

The US believes that the person who leaked this news is trying to undermine Italy’s participation in the coalition against ISIS.