Apulian Rustic-Luxe: the magnificence of Ostuni 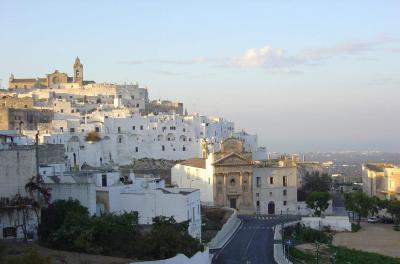 OSTUNI--Rising in shimmering white out of a lone hill, towering over miles of Apulian olive plains and gazing across the Adriatic lies this dazzling city, otherwise known as ‘La Citta Bianca’ or ‘The Queen of Olives.’  A city deserving of its regal title, the hill top buildings are still fortified and overlook many ancient masserias, farm houses which have also retained their fort-like structures, protecting against raiders from the sea.

Across the ocean lies Dubrovnik, once described by Byron as ‘the pearl of the Adriatic’ and for a while Apulia’s own iridescent charm had been overlooked in favour of its Dalmatian neighbours. Brits too, flocked to purchase second homes in Tuscany and Florence, without the knowledge of similarly astounding baroque wonders to be found in Apulia’s Lecce.

But now the times are changing. Ostuni and its surrounding countryside has become deftly adapted to the 70,000 tourists which pour into the area each season. At the same time, the unique charm and low prices of the town have been retained, and combined with an approach to hospitality which makes Romans seem comparatively Parisian, this makes Ostuni a vital destination for any Italian-explorer.

In particular, the agro-tourism industry is booming, its increasing popularity reflecting the unique insight into the rural pace and values of Apulian life. During my visit I stayed in a number of various masserias- Apulia’s answer to the B&B or farm-stay which are being converted by a number of English internationals as well as native Apulians. Thanks to the ancient agricultural richness of the region, the masserias are invariably elegant, large, vaulted- ceilinged buildings, many of which were once owned by noble families.  Set amid private olive groves and orchards, staying in these fortified farmhouses, where once large numbers of farm workers and their animals lived together, is an unforgettable experience.

Whatever your budget, this is an accommodation option open for almost everybody. Masseria Tolla was the cheapest I visited, but perhaps the richest in hospitality and unique character. Approaching this unusually gothic stone building we were greeted warmly by Manuela and her husband Giuseppe, a talented carpenter who had restored by hand much of the furniture in the house. Everywhere we turned we found idiosyncratic insights into the rural life of previous centuries: above the tiny chapel of Saint Lucia attached to the main building was a sign bearing the inscription: ‘no asylum here’. Giuseppe explained to me that this served to discourage malevolent brigands who once terrorized the region from claiming sanctuary in their church.  Inside the large bedrooms there remained traces of previous animal guests- stone troughs and rings once used to tie up horses complimented the antique furniture and vaulted ceilings. This was a brilliant place for a Rustic-luxe getaway.

A remarkable mid-range option is Masseria Salinola, a mere kilometer from Ostuni and proudly run by Daniele according to high-end standards of hospitality. Surrounded by seven hectatres of cultivated land, the building itself was not used for livestock as with Masseria Tolla but as an old salt warehouse which dated back to the sixteenth century. Daniele and his family had succeeded in combining the character of this ancient property with contemporary freshness. Rooms were large, airy and sensitively decorated, some even included luxury features such as a steam room and rainforest showers. Although the ocean is only a ten minute drive away, there was a beautiful swimming pool to relax by, which was nestled into the surrounding olive groves. Guests are encouraged to also dine at Salinola, and I was presented with a veritable feast of typical Apulian cuisine, including home made orecchiette pasta prepared with produce that had been grown on the Masseria’s land. The simplicity of dining in this way is what makes the Masseria accommodation so special and keeps eating costs down. When local produce tastes so good there is no need to attempt complicated, exotic dishes. My Apulian hosts stuck to what they knew and it tasted amazing.

The last Masseria at the highest price (although, for 140 euros a room, hardly unachievable) was the famous Masseria Il Frantoio, a house set within its own organic farmland and family run with an almost utopian efficiency.  Travelling down the exquisite Cyprus tree lined road out of Ostuni, I felt as though I had been transported to a remote, tranquil idyll. Citrus gardens, roaming peacocks, peaceful courtyards and miles of rolling, ancient olive groves obscured any reminders of the outside world.

Il Frantoio was obtained by an ex-chemist from Bari, Armando and his wife Rosalba twenty years ago. Armando left his life as a chemist in Bari to take up the farm, to eat good produce and, he says, “to treat every guest as if they were myself”. At the core of the farmhouse lies the 16th century olive press, while the ten exquisite bedrooms were in the 19th century part of the house.

Hauntingly, the masseria had been owned for 500 years by the Tazzarelli  family who also had a place in Ostuni town. When there was no heir to continue the family line at Il Frantoio, both the farm and house were left deserted for seven years, which as Armando explains, is an awfully long time for nature to be left to its own unbridled devices.

When Armando and Rosalba purchased the place they also inherited everything that had once belonged to the family; a collection of wedding dresses, antique beds, the linen, even the whole library. A collapsed roof threatened to spoil everything with dampness, but Armando and Rosalba managed to salvage almost every fragment of the noble family’s lives. In the library a faded photograph shows the couple carefully drying each old book in the sun. Similarly, a Fiat 500 from 1949 that was once left in the garage had been mechanically restored and reupholstered in Liberty-fabric, and was now used to take guests on tours of the estate. All of this is what makes a visit to Il Frantoio so unique- the careful restoration allows you to feel a part of the masseria’s history; a severed noble lineage finds continuation and its traditions are shared with the guest.

Not only are the rooms breathtaking, decorated traditionally yet eclectically, but the food, as with every masseria visited, was superb. I was there for Sunday lunch, a nine course gastronomic extravaganza and a remarkably sociable occasion. Rosalba takes charge of the food, and each dish prepared with organic, homegrown produce and accompanied by a different olive oil and local wine. I later learnt that, for the last twenty years, Rosalba has varied the menu with every lunch and dinner served- no meal is alike to another- so the feast each guest has enjoyed is genuinely unique. I ate an array of dishes such as chicory in sheep’s cheese, filled and fried zucchini flowers, saffron infused goats cheese, and the most tender lamb I have ever had the fortune to encounter.

As tempting as it was to pass each day lounging in the grounds of the masserias, there were countless other places to explore. Apulia has more coastline than any other Italian region, and the Adriatic is far cleaner than the sea off Tuscany. The stretch of coast that Ostuni towers over is dotted with some un-crowded, peaceful beach cafes and clubs, while other beaches are protected nature reserves. Nearby there is Villanova, a charming port to visit and a great place to  sample some local seafood.

The Grotte de Castellana is a super day trip to take, especially if the heat (in summer reaching 40 degrees) is becoming too much to bear. Descending beneath the ground into a cooling temperate zone of 15 degrees, you can explore a limestone subterranean world which has built up over the last 91 million years.  These sprawling caves, discovered in the 18th century, labyrinth and connect with each other under long stalagmites and stalactites. You can visit the Grotte di Castellana only on guided tours, usually one per hour until early afternoon, and with Ostuni as your base it takes 45 minutes by car.

By far the most relaxing way to spend a day is strolling around Ostuni old town itself. Ostuni was officially founded by the Ancient Greeks in the 1st century BC, who named the risen town ‘astu-neon’ meaning ‘new city’. There is, however, evidence of settlers in the area from much earlier- ‘Delia’, is a 25’000 year-old skeleton of a pregnant woman who was found buried nearby and which is now on display in the Monacelle church in Ostuni.

The Greek element certainly resonates in this mythical town. The narrow, blindingly white alleyways, the low archways and the dramatic flights of stairs which lead only to someone’s front porch created an enchanting labyrinth to explore. What makes exploring Ostuni so magical is that, although the town hums with activity, another tourist was rarely encountered giving the feeling that each crevice was somehow unchartered or discovered.
Invariably, I found myself perched on the hillside, overlooking kilometers of rolling olive groves, into the turquoise ocean as all routes eventually led to a dramatic ocean vista.
Around every blind corner was an unexpected delight--  a tiny local trattoria serving medieval Apulian cuisine or a huddle of jasmine covered white houses, clambering over one another for space. Yet this quaintness is juxtaposed against more baroque elements which give a particular sense of noble grandeur to Ostuni.  The crumbling palazzo of the old well-heeled families of Italy’s boot dominate the warren-like streets—the romantic ruins serve as an evocative reminder of Ostuni’s lengthy history and ancient status.

Situated at the heart of the old town is the cathedral, built in Byzantine style and dating back to 1437 this stands out amidst the white buildings with its pinkish limestone. In front of this cathedral there is the Arco degli Incalzi, Ostuni’s answer to the Bridge of Sighs and a magnificent arch which divides the square into two.

Piazza della Liberta is the main piazza which links the old town with the new, at night time this buzzes with energy, but in the day there is a sleepy peacefulness as tourists and residents take a breather from their activities and observe one another instead. To the side of the square, there is a 17th century baroque obelisk atop of which perches St Oronzo, surveying the glimmering white, fortified old town beneath him.

These baroque and sometimes gothic punctuations all contribute to the architectural splendor of Ostuni and as a tourist here you feel desperate to somehow share in it. Walking back to my bed and breakfast one evening I chanced upon the perfect place, a magnanimous old deserted palazzo, standing proudly despite its state of disuse.
Looking closer at the stucco crest which loomed above the door it was instantly recognizable as that which was above to the entrance to the farmhouse at Il Frantoio and belonging to the heirless Tanzarelli family. Here was another building left to ruin by the broken lineage. Although the windows were boarded up and weeds were protruding through the walls its faded elegance was crying out for tender restoration.  Like Ostuni itself, who knew what undiscovered treasures could be found in there? It was then that I knew I’d be returning to Ostuni very soon.