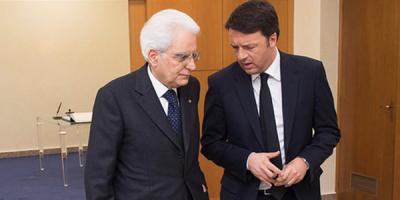 President of the republic Sergio Mattarella, and Premier Matteo Renzi
ROME - Migration, regional elections and the Mafia Capitale scandal top the list of reaons as to why Italian Premier Matteo Renzi's confidence ratings have dropped substantially by around 30 percent from when he came into power.
Renzi came into office with a respectable 61 percent, managed to reach an impressive 70 percent in the wake of the European election success, but now suffers from a 36 percent confidence rating, according to a recent poll carried out by Nando Pagnoncelli, published Monday by Corriere della Sera.
His ratings have fallen rapidly from the beginning of the year, when he was hovering around 50 percent. Both the cancellation of the announced U-turn on education and the withdrawal of land registry reform explain such a drop, and furthermore point towards a struggling PM.
Moreover, a very worrying figure for the premier is that of Northern League's Matteo Salvini confidence rating, which is on a complete par with Renzi's.
However, Renzi is not the only politican to worry as confidence in politicans, and the ruling elite as a whole, has fallen significantly. Pietro Grasso, the president of the Senate suffers from a low 40 percent confidence rate. President of Chamber of Deputies, Laura Boldrini currently has a 33 precent rating, a considerable drop from the 57 percent when she was sworn in.
The migration crisis and the inability of the government to act efficiently and effectively has damaged their confidence ratings, as well as the inability to trust in the government after the unveilings of the mafia capitale scandal. The Democratic Party was also sorely hit by the regional and municipal elections which highlighted a rupture in the Democratic Party between the centre and the peripheries of the party.
However, it is worth noting that the President of the Republic Sergio Mattarella still enjoys significant approval, with two thirds of Italians expressing their confidence in him. This figure underlines an ongoing trend, noted also with Ciampi and Napolitano, whereby presidents of the republic continually garner much more support from citizens.
Despite disillusionment with the political elite as a whole, confidence in the Italian economy's ability to recover, has risen since the start of the year, albeit with a slight fall very recently.
Italy