Sacred Art and The Theology of the Body, Caravaggio 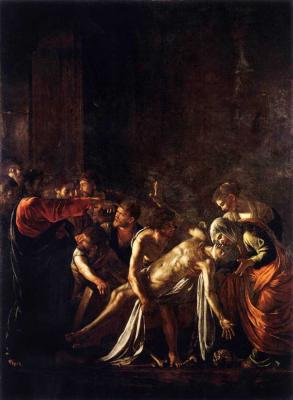 Ave Maria, FL - The "Theology of the Body" and a revival of Sacred Art are the answers to the errors of Modernism, Descartes' attack on the body, and the vacancy of Abstract Art.

From his Theology of the Body Saint John Paul II said, "The body can never be reduced to mere matter; it is a spiritualized body, just as man's spirit is so closely united to a body that it can be described as an embodied spirit." (1)

Dr. Michael Waldstein in his book, the translation of John Paul's TOB continues,

"The ancient Gnostics found themselves in a demonic, anti-divine universe. Matter was evil. Yet, the truly bottomless pit is opened only by the Cartesian universe with its complete indifference to meaning. Matter is "mere matter", sheer externality. It is value-free. The reason for this indifference of matter to meaning lies in the rigorous reconstruction of knowledge under the guidance of the ambition for power over nature." (2)

The "Theology of the Body" is a teaching that can be studied that can reset the aberrations about the sacredness of male and female, love and sex, and marriage. And the TOB ultimately becomes about the worth of the individual human person.

I am not qualified to explain the TOB fully. I do wish to propose that there is a connection between Sacred Art and TOB. The best source for understanding TOB in depth is Man and Women He Created Them: A Theology of the Body by Professor Michael Waldstein who has explained the teachings of John Paul from the Pope's Wednesday General Audiences from 1979 to 1984. Professor Waldstein in his introduction explains how John Paul makes the connection between TOB and Beauty. "Deeply struck by the beauty of love between man and woman, he committed himself 'to the service of 'fair love,' because love is fair, it is beautiful." (3)

Dr. Waldstein, has said recently that Jesus did not come to bring a list of moral principles, he came in the flesh, to save individuals in their bodies.

Sacred Art and The Theology of the Body meet as they both point to Beauty. TOB asserts the great dignity of the individual person. It is a subject who loves. Likewise only a subject can make art.

The holiness of the saints is a highly personal thing. They act out their own particular destiny that is unique. A set of linear instructions, one fits all, would not work. In the same way left brain functions can not produce art. In Art and Faith Philosopher Jaques Maritain said, that there is a similarity in the transcendence of the saint with that of the artist. (4)

The saints have always lived a theology of the body. Their bodies became holy. It was their bodies that were crucified, burned, and beheaded. The Church has always taught that we are a body soul composite. Not a soul with a body, and not a body with a soul. "The only really effective apologia for Christianity comes down to two arguments, namely, the saints the Church has produced and the art which has grown in her womb." (5)

Pope Benedict XVI the scholar has not cited the great intellectual tradition of the Church, he names two places where the Faith is en-fleshed. These two have inspired pilgrimages for centuries. Today backpacking pilgrims for art retrace the steps of pilgrims for the faith from centuries past.

A theology of the body has always informed Christian Sacred Art precisely because "The Word was made flesh and dwelt among us."- John 1:14.

Sacred Art  can not be merely abstract. And there is no such thing as Reformation Sacred Art. Reformation Protestantism, because it is a religion stuck in words, embraced Iconoclastic ideals. And since it believes that salvation is from faith alone, why would it want to portray good works, martyrdoms, and miracles that involve bodies.

It is as if Caravaggio paints with flesh. In his paintings the light of Faith illumines figures telling Biblical stories. He has been called "Painter of Miracles". (4) It is Heaven brought down to earth. Sinners become saints in dusty rooms and alleys in the Rome of 1600 when he posed his street friends in contemporary dress and in biblical robes.

The contemporary Secular view of Caravaggio goes like this; We love his art, his life is fascinating, it's too bad he's Catholic.

In one of those unexpected moments in the history of art, Caravaggio (Michelangelo Merisi da Caravaggio) painted The Calling of Saint Matthew that, as Art Historian Sir Kenneth Clark has said, "changed the History of painting". (3) And he invented a new way to make religious paintings that has lasted for centuries. His friends, those boys, and men, who were musicians and card sharks in his early paintings became sinner/saints in brilliant simple narratives. If Renaissance Art with its exalted glory, saints were portrayed in Heaven in the form of Greek Gods. Caravaggio brought them to earth looking like us, in the flesh, and real.

Pope Francis said that he has sat and contemplated Caravaggio's Calling of Saint Matthew (see below), in the French Church in Rome, San Luigi dei Francesi, saying, "That's me, Matthew the sinner." He connected this experience with his constant teaching about mercy.

Counter Reformation Art in Rome at the time of Caravaggio, 1600 AD, was at the same time as the new classless faith of Saint Phillip Neri, lived on the streets of the city. It was very much about good works. Caravaggio brought mysteries, martyrdoms, and miracles down to earth. There was never a separation of spirit and body.

Caravaggio knew about death in the streets. He was familiar with jails and dungeons. He knew that his art was important and probably suspected that we would treasure it centuries later. In his life lesser artists were copying his innovations and style. They were getting the good commissions because they were more comfortable in the world. Because he did not fit with the times he was able to portray transcendent ideas with passion and clarity.

When he painted The Raising of Lazarus (top), Caravaggio was in exile in Messina, Sicily and he used hospital workers as models and they held a dead man. The Gospel account could not be more visceral, it mentioned the stench because Lazarus had been dead for four days. Caravaggio, always faithful to the Gospel, would paint the stench.

In Caravaggio’s painting Lazarus has the pose coming from the dead with arms spread, that Christ would assume on the cross going to the dead. One gets his body back, the other gives it away. The raising of Lazarus in the gospel narrative is about the body and death before the story of the cross.

The cross without a body has become a symbol. There is nobody, no body. The removal of the body from the cross was Reformation Iconoclasm’s first step in progressing toward an abstract art and the ability to fashion a purely personal religion. The cross without a body is a symbol, and as such, one is allowed to make up one’s own meaning. The en-fleshed story was discarded.

I did not know what Protestants in general thought about the difference of the cross without a body as apposed to the cross with a body until a friend sent my article The Raising of Lazarus, about the Caravaggio painting, to his scholar colleagues in England. They explained, "We are on to the Resurrection while you Catholics are stuck on the crucifixion." They had become interested in the Church since the successful visit of Pope Benedict XVI to England. The difference is that, Catholics, as professed in their creed, believe in a resurrection of the body.

When Cartesian dualism set the intellectual ground to be comfortable subduing and mastering nature and bodies, art took a path to follow the mind newly loosed, free to follow the its own whims, which led to Abstract Art and finally to Conceptual Art, art that is just an idea.

Sacred Art and The Theology of the Body are tangible and real. Catholics profess a "Communion of Saints," and a "Resurrection of the Body."

Caravaggio's principle biographer, Helen Langdon describes the importance of pilgrimage in his time in reference to his painting in the church of  Sant' Agostino in Rome of The Madonna of Loreto (see below) or The Madonna of the Pilgrims.

"In these fervent years the medieval passion for pilgrimage flourished. Luther had railed, "Let every man stay at home in his own parish; there he will find more than all the shrines even if they are all rolled into one."

Luther's belief values the abstract over the particular in regard to place and is consonant with prizing, with regard to faith, the written word and mental constructs over bodies." (6)

"Caravaggio had himself been born in the shadow of the great pilgrim church of the Madonna del Caravaggio. The church was commissioned by Carlo Borromeo to commemorate the appearance of the Madonna to a peasant girl in 1432, and the work on it, which began in 1575, must have lasted through Michelangelo's childhood in Caravaggio. A vast undertaking, it created a constant sense of the intensity of Counter- Reformation spirituality, with its belief in miracles, and in the comfort of the Virgin's mediation on behalf of mankind. The church is still a center of pilgrimage, an oddly rural sight with its surrounding fields and poplars, among the supermarkets and garages that spread from Milan." (7)

The healing waters still run under the Baroque basilica.

Caravaggio addressed the core of Christianity. That God became man forever connecting the two. This was not like Conceptual Art, an idea to ponder, it was enacted, lived, in the flesh. Because of this everything about bodies, suffering and death, and love and hope have been forever changed. And Caravaggio, the master storyteller, was able, because of his special gifts, to make these truths real in a beautiful way.

"Beauty is the form under which the intellect prefers to study the world. All privilege is that of beauty; for there are many beauties; as, of general nature, of the human face and form, of manners, of brain, or method, moral beauty, or beauty of the soul." (8)

As Art is very much about Beauty so too is "The Theology of the Body" because in "Man and women He created them." Saint John Paul has rendered with care and depth the Beauty of how we are made,  and of how we may know who we are. 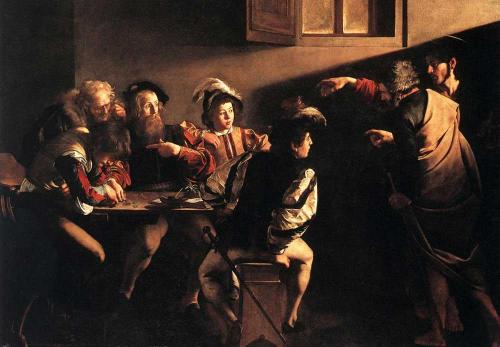 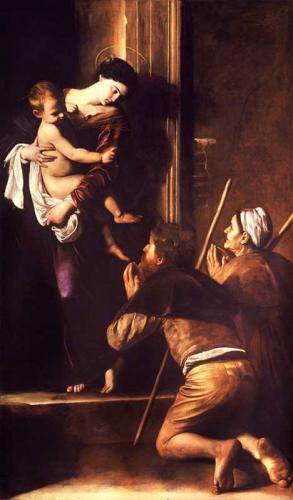