ETRUSCAN NECROPOLIS GETS A NEW LIFE 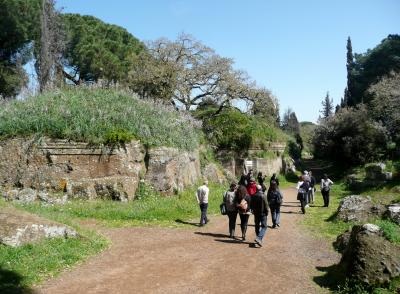 The Street of the Dead

CERVETERI - The magnificent Necropolis of Banditaccia has been restored to its former glory. Once the necropolis was a "must" on every 21st century "grand tour" of Lazio, but gradually, inexplicably, over the last 20 years this magnificent and unique archaeological site fell into a state of neglect.

Despite it having been proclaimed a UNESCO World Heritage Site in 2004, it continued to slip down the list till it dropped into near oblivion with only a handful of foreign tourists arriving to mingle with the school groups on field trips with their teachers.

Fortunately, during the last couple of years, it has been making a grand comeback, thanks to extensive restoration and a marketing campaign launched by Cerveteri's young and energetic town council team, headed by 34-year old mayor Alessio Pascucci.

The Necropoli della Banditaccia is the official and little-known name (at least as far as non-Italians are concerned, probably because it is so difficult to pronounce) of the great Etruscan burial ground of Cerveteri.

An authentic city of the dead, the site spreads over fifty hectares and contains over two thousand tombs, not all of which have been excavated. Only a fraction of the area is open to the public, but that is impressive enough, with endless rows of grass-covered beehive-shaped mounds set among ancient gnarled trees, thick shrubs and creeping vegetation that threatened in the past to swallow them up.

Thanks to the efforts of the Cerveteri Town Council team and the Superintendency for Southern Etruria, backed by the Lazio Regional government, the overgrowth has been cleared and visitors can stroll along the original paved streets among the green-capped tumuli. However, in order to enhance visitor experience, a few of the most important tombs have been installed with multimedial images, created by popular Italian TV scientific programmers Piero Angelo and Paco Lanciano, who also created the highly successful audio-visual effects in the Roman Houses under Palazzo Valentini, Rome. At Cerveteri, for instance, the Tomb of the Greek Vases lights up with projections of the typical grave goods that were once deposited along with the dead occupant, and a chanting funeral procession with flickering torches flits ghostily along the wall of the 19-bed Tomb of the Pillar.

The dead were placed on stone couches in burial chambers built to resemble the dwelling houses of the living,so that they would feel more at home. They have rooms, alcoves and peaked stone ceilings and were once decorated but, unlike the Tarquinia necropolis, few wall paintings have survived. Cerveteri, however, can boast the unique Tomb of the Reliefs where the walls are covered with carvings of tools, arms, household implements and everyday objects used by both men and women, as well as some frescoes featuring Etruscan demons.

The cemetery was in use for eight centuries, preserving strata upon strata of civilizations from the Iron Age to the Roman era. This means that the oldest tombs are buried deep underground, with more recent ones contructed on top.

The Banditaccia Necropolis is not the only important burial site at Cerveteri, which, under its ancient name of Caere, was one of the most important Etruscan cities. In 1974, a monumental 4th century BC tomb was discovered in an area known as Greppe Sant'Angelo. The tomb entrance was concealed behind a wall and was guarded by a pair of stone lions, a couple of 160 kgs winged sphinxes and a life-sized hunchback humanoid believed to represent Charon, the mythical ferryman who conveyed the souls of the dead over the Styx to Hades. The whole design of the tomb, as well as the sculptures found inside it, bear an amazing resemblance to the Tomb of Amphipolis in Macedonia, which some experts believe may have been the last resting place of Alexander the Great, or one of his generals. Although definite identification is impossible, the similarities between the two tombs prove that there were close cultural ties between the Etruscans and the Macedonians even in that remote era.

The Greppe S. Angelo burial chamber was reconstructed inside the Cerveteri Museum, but last May one of the sphinxes was stolen. It was hidden in a field, ready to be smuggled abroad where it would have been sold on the flourishing black market for Italian antiquities. Very fortunately, it was discovered in time by Italy's crack corps of cultural heritage police, who recovered it and restored it to the museum in time for the town's celebrations to mark its tenth anniversary as a UNESCO heritage site.

The renaissance of Cerveteri has not been confined solely to the Necropolis, however. The town museum, the National Museum of Cerite (the former name of Cerveteri) inside the 16th century Palazzo Ruspoli, has revolutionized its exhibition space, to create a living museum with "talking showcases" which curators claim are the first of their kind in the world. The cases are installed with what is called "Touch on Glass" technology by which visitors can single out an object that interests them and, by a light swipe on the glass, can access a descriptive video complete with information on where it was originally discovered.

For the next few months, visitors will have the chance to see two of Cerveteri's most sensational antiquities, returned to their place of origin. These are two masterpieces of ancient ceramic art from the 5th century BC Greek workshop of Euphronios. Both have had a chequered career and have survived almost by a miracle. The Kylix of Euphronios, a large wine cup with a diameter of over 46 cms, was found in the Sant'Antonio area of Cerveteri in the 1980s and ended up by a dubious route in the Paul Getty Museum of Malibu, USA. In 1999, Italy managed to have it returned. The Kylix is decorated by the maestro Euphronios and his pupil Onesimos with scenes from the Trojan War. Unfortunately, it is not complete. Experts believe that it was broken and fragments have been sold separately. They have not given up hope that other pieces may turn up sometime in unexpected places.

The Crater of Euphronios, also on display in the museum, is even more famous. This large, two-handled terracotta bowl, which was used for mixing wine and water, is the best preserved of the twenty-seven surviving vases painted by Euphronios. It is also one of his last works and antiquarians believe that this may have been because he was going blind. This piece was also stolen and sold in the 1970s by unscrupulous dealers for a million dollars to the Metropolitan Museum of New York. The Metropolitan was understandably reluctant to part with it – one of its prize exhibits – but after long negotiations, Italy got it back in 2006.

The two vases are now the property of the Villa Giulia Etruscan Museum of Rome and are therefore only on loan to Cerveteri, where they will be on exhibit until the end of October. However, Mayor Pascucci has not given up hope that they may be allowed to remain for a longer period in what is their rightful home and setting. 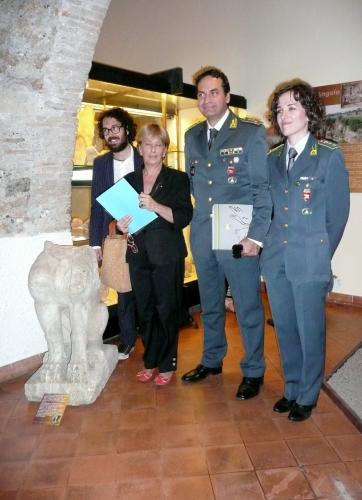 Mayor Alessio Pascucci (far left) with Rita Cosentino, curator of the Necropolis and the Ceriti Museum, and officers of Italy's special heritage police force with the recently recovered sphinx 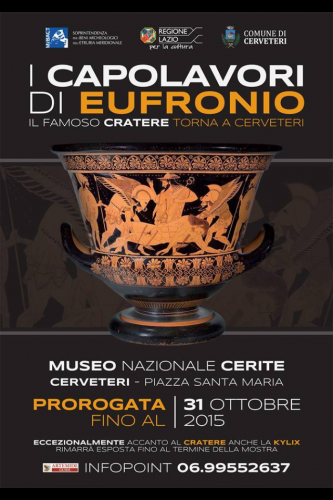