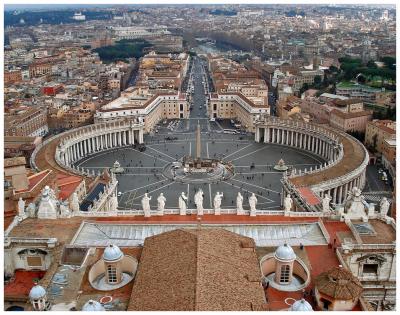 ROME - From Nazi enterprises to money laundering and profiteering, the new book, God’s Bankers, by Gerald Posner, claims to blow the lid off of the secretive world of Vatican Banking.

In a recent interview with NPR, Posner explained that the history of Vatican banking has its roots in the Italian Unification of the mid-late 19th century. “They (The Vatican) had 15,000 square miles of what was central Italy with thousands of subjects.” Posner told NPR’s Renee Montagne. “They Levied taxes and paid for this lavish lifestyle – with 700 servants and a big and growing bureaucracy around them. Then, in 1870, Italy’s nationalists have a revolution. They throw the Pope out, they get rid of the papal states. The Vatican goes from being an empire- an earthly empire – to a little postage-stamp size of a property called Vatican City.”

According to Posner, the Institute for Religious Works (IOR) as the Vatican bank is formally called is somewhere between an offshore bank and the Federal Reserve of the United States, often providing a convenient place to launder dirty money because of the lack of regulation placed on the bank, as it is only subject to the laws of Vatican City, which is an independent state.

By the early 1940’s, the Vatican had sizable investments in business’s and organizations throughout Europe, and The Institute for the Works and Religion (IOR) was founded on June 27,1942 by Pope Pius XII. It absorbed the Administration of the Works of Religion, which had originated as the Commission for Works of Charity, which had originally been established by Pope Leo XIII on February 11, 1887.

Mr. Posner claims that the creation of the Vatican’s bank had a more insidious motivation behind it then merely organizing the various investments of the Vatican – to hide it’s investment in German business from the Allies during World War Two.

"I was surprised the extent to which the Vatican was deeply embedded with German companies. They bundled together life insurance policies of Jewish refugees who had been sent to Auschwitz and other death camps. They escheated these policies early on — meaning they took the cash value of them." Posner told NPR.

Eventually, when the families of those killed in various Nazi concentration camps went to claim their insurance policies they where refused.

"These insurance companies would refuse to pay out saying: 'Show us a death certificate,' which they knew was impossible. They would keep the money." Posner continued.

In 1999, in the case of Alperin v. Vatican Bank, a large amount of Holocaust survivors sued the Vatican Bank because following World War Two, people associated with the bank allegedly helped the Ustaše, a group of Croatian revolutionaries, hide in Pontifical Croatian College of Saint Jerome with a large stash of gold looted from Jews.  The case was eventually dropped as it was been carried out from a court in California with no legal way of sueing Vatican City.

The bank has seen almost constant scandal since then. In 2010 Italian magistrates reprimanded the bank for 23 million Euro on the grounds that it had violated numerous anti-laundering laws.  On May 24, 2012, Ettore Gotti Tedeschi, the former Vatican Bank head was ousted because of his alleged "failure to fulfill the primary functions of his office".

Pope Francis has made a strong attempt for reform: ruling in April 2014 that the Vatican Bank will operate based on a new model of transparency and will be subject to strict oversight by two separate papal commissions, as well as promoting Australian Cardinal George Pell to Secretariat for the Vatican economy.

Whether or not to bank is reform able is still the subject of debate, but the history of the scandal-ridden Vatican Bank, surely makes for a very interesting read.